The freight & logistics sector is a vital component of the economic health of the country with the logistics industry itself worth over USD118.3 billion to the UK economy and employing one in twelve of the United kingdom’s working people. Globally, the United Kingdom is the second largest exporter of services, after the United States. The strong growth of the automotive sector and the resilient growth of the manufacturing sector are expected to support the growth in the logistics sector.

The road freight transport operates the most extensive transport network of all the freight modes, which provides flexibility and convenience of door-to-door delivery. Road freight transport occupies major share in the inland freight transport with ~90 percent followed by rail. Although the segment registered a decreased trend during 2016-17 in international road freight, revenue has returned to its strong growth. The industry is highly competitive and fragmented. Being a developed country, UK was ranked 27th position in terms of quality of roads in a report released by world economic forum, which indicates the improvement needed in the road infrastructure. In England, government took an important step towards the next stage of road developments with the publication of report on road investment strategy 2 (RIS2). Highways England aspires to focus on smart motorway network, maintenance, and renewals, which, in turn, is expected to boost the road freight industry.

Brexit - A Threat and an Opportunity

According to logistics industry survey 2017/18, there has been growing concerns among the logistics business operators, owing to the complex external factors, like Brexit uncertainties, slower UK growth, Sterling weakness, and UK interest rates, which are expected to show a negative impact on the market. The uncertainties, which are projected to arise by UK leaving the European Union (Brexit) could severely disrupt the country’s logistics industry. The UK imports most of its natural resources from the other European countries. Owing to the Complex trading conditions arise from the Post-Brexit situations, the market is expected to witness higher fuel prices, trade tariffs, and increased commodity & finished goods prices. The increased fuel prices could affect the End-users since logistic service providers are going to impose the extra costs on consumers. Another key concern is that the European nationals contribute around 10% of the United Kingdom’s commercial drivers. Pre-Brexit negotiations have created tremors in the European nationals, which made them to focus on the countries where they are more certain of their future rights. The loss of workforce is going to impact the logistics industry, which cannot fulfill the demand due to the shortage of commercial drivers. Additionally, the Republic of Ireland and Northern Ireland trades freely with a significant trading volumes. But, the trade relations between the two regions are likely to be severely hampered unless an acceptable trade agreement is reached.

On the other hand, Brexit offers opportunities in terms of technological advancements since it serves as a potential catalyst for alternative fuel market. The increased imported fuel prices is the major factor that allows the commercial transport services to shift their focus from fossil fuels. Government is also expected to provide incentives for this process, which reduces the pollution and dependence of kingdom on fossil fuels. 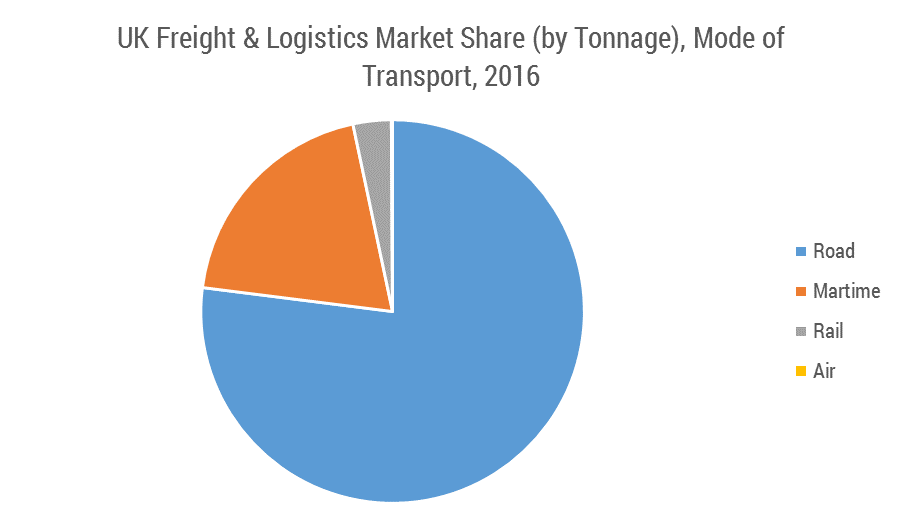 June 2018: Nestle has collaborated with logistics and transport solutions provider XPO logistics to develop a digital warehouse with advanced sorting systems and robotics in United Kingdom. Under the deal, the duo plans to build a 638,000 square feet distribution centre at the new Segro East Midlands Gateway Logistics Park in Leicestershire.

May 2018: The port of Grangemouth plans to strengthen its position as Scotland’s premier port with a multi-million pound investment program. The program includes new terminal operating system, warehouse development, container terminal surfacing upgrades, and a ship to shore crane investment.

Reasons to Purchase this Report:

This report can be customized to meet the desired requirements. Please connect with our analyst, who will ensure that you get a report that suits your needs.