Out of all seed treatment products, fungicides are the leading segment in South America in which Brazil is the largest market with a share about 45% of the total market in the year 2016.  It is the largest producer and exporter of soybean in the South American region, exporting around 68.2 million ton of soybean in 2017 worth USD 25.7 million. Increasing attack of fungal diseases, insects, and nematodes on seedlings in the region is the major reason for the use of seed treatment chemicals on soybean.

The dry climatic conditions in Brazil and Argentina are increasing the insect and rust infection in the soybean crop during their growing period. This has created a huge demand for quality seeds which require less irrigation and are insect resistant, thereby, increasing the opportunities for the seed treatment market in the region for soybean. Also, the increasing pressure on farmers to produce more from the limited resources to fulfill the export demands is encouraging farmers to use treated seeds. 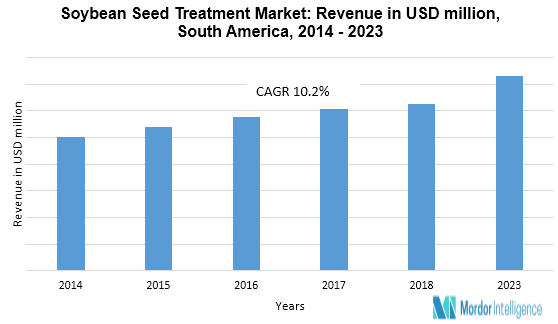 In South America expansion in the usage of soybean is associated with food and fuel markets and  it is used for producing soybean oil for human consumption, animal feed, and producing biodiesel. Presently, around 22% of the soybean oil produced in Brazil is used for biodiesel production. Soybean oil accounted for 75% of the vegetable oil produced in Brazil and a half of this was used domestically and the other half was exported. Mostly about more than half of the South American soybean production is directed towards China.

CONNECT WITH US RIGHT NOW