In 2016, the biggest shift in the European electricity system was the significant change from coal generation to gas generation. This has considerably reduced coal generation by almost 12%, thus increasing the natural gas generation by around 20%. As a result, the CO2 emissions from the European power industry reduced by 4%, about 1,018 million metric ton of CO2. Owing to coal plant closures and an increase in carbon price support, over 50% of the shift happened was observed in the United Kingdom. Countries, such as Italy, the Netherlands, Germany, and Greece witnessed significant switch over from coal to gas. Such developments in gas-based power infrastructure are expected to drive the demand for gas turbines in Europe during the forecast period. 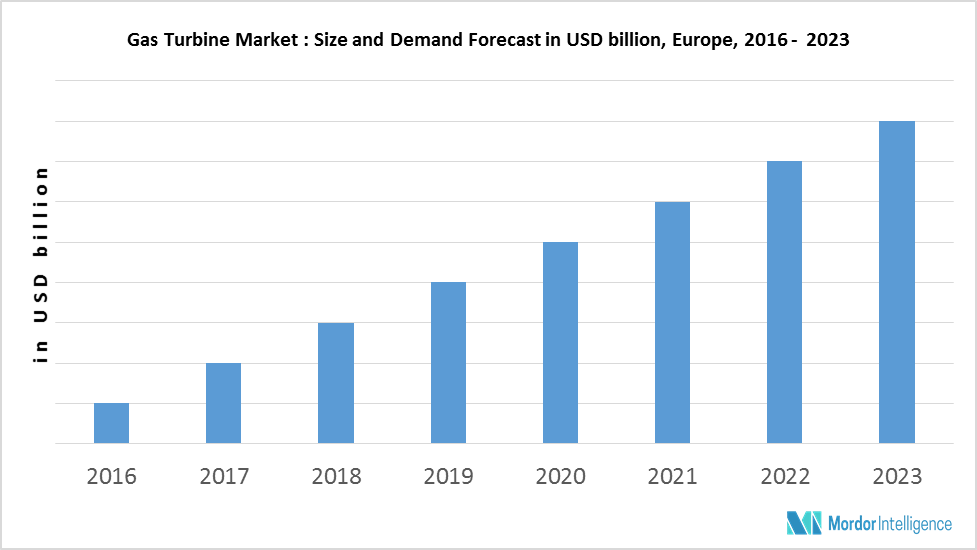 Germany among the Leading Gas Turbine Segments in Europe

Germany is an industrial and economic powerhouse of Europe. In 2011, Germany made a strategic decision to stop its dependence on nuclear power, by 2022. The German government supported the plan of replacing the loss in power generation capacity, with power generated from renewable sources. However, the unpredictable nature and lack of constant output from renewables are expected to force the development of natural gas power plants, as a less polluting alternative.

Gas-based power plants in Germany are mainly deployed for combined heat and power (CHP) projects, also termed as cogeneration. The significance of CHP plants for the German power generation market is evident, as two out of three newly-built large combined-cycle power plants are expected to be of combined heat and power configurations over the forecast period. With an efficiency higher than 61% and fuel utilization efficiency in cogeneration of up to 85%, a CHP plant is expected to have a lower footprint, higher efficiency, and lower emissions, as compared to a highly distributed generation setup. In addition, Germany's amended Combined Heat and Power Act of 2016 supports cogeneration plants, with outputs exceeding 2MW. As a result, the growth of cogeneration plants is expected to spur the demand for gas turbines in the country, during the forecast period.