The Asia-Pacific malt ingredient market is expected to register a CAGR of about 5.2 % during 2018-2023 (the forecast period). The market is estimated to reach a value of USD 5.6 billion by 2023. Malt ingredients have been traditionally used for beer-making through the process of fermentation. The market is highly competitive, with all the players competing to gain greater market shares.

The growth in the rate of consumption of processed and convenience food products in the emerging markets, such as the Asia-Pacific countries, has contributed significantly to the sales of malt ingredients. The factors, like rise in the consumer awareness, regarding the health benefits of malt ingredients, and the wide range of applications in the food industry, are driving the market growth. Usage of malt in beer is expected to account for a major chunk of the market, followed by distilleries and the food industry. The demand coming from developing regions is driven by an increase in the disposable incomes.

The Asia-Pacific malt ingredient market is expected to gain a substantial growth during the forecast period, owing to an expected high demand for healthy products from India, Japan, and China. The growth can also be attributed to the increase in the spending capacity of buyers in the region.  These opportunities are fueling the demand for all natural food products and ready-to-eat and packaged food.

Oats and Rye are the Fastest-growing Segments

Malt produced from malting grains is available in various forms, such as malt, malt flour, dried malt extract, liquid malt extract, kibbled malt, malt flakes, malt vinegar, and malt syrup, among others. Malt and malt flour segment holds the largest market share, as malt is used for beer, whisky, and beverages manufacturing. Alcoholic beverage industries have a direct contract with the malt suppliers for two-row, four-row, and six-row malt grains or for malt flours, which create an unbeatable demand in the market. The barley segment holds the largest market share, due to barley’s preferable malt consumption in the beverage industry. Oats and rye are the fastest-growing segments, as both oats and rye have a nutritional profile and their increasing application in various flavored food products. 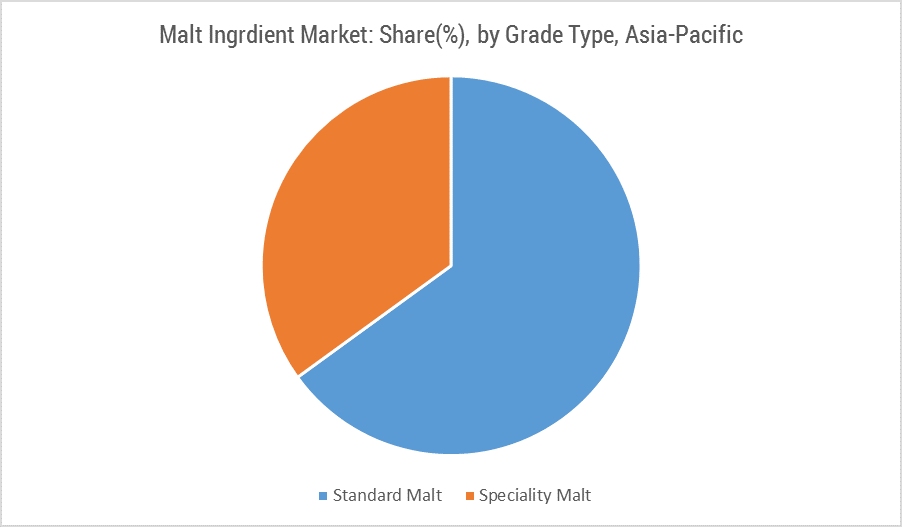 Malt ingredients has several applications, such as in brewery, distillery, bakery, cereals, confectionery, non-alcoholic beverages, and others, such as snacks, savories, etc. Brewery application consumes high percent market share in the malt ingredient market. By commercial grade type, the malt market has been segmented into standard malt and specialty malt. The standard malt segment holds a large market share, whereas the specialized malt segment is expected to record the highest growth rate during the forecast period.

The countries, like China, India, Japan, and Australia, are the major markets for malt ingredient in Asia-Pacific. The growing demand for alcoholic and non-alcoholic beverages and food products in the region is driving the market. Asia-Pacific is the fastest-growing regional market for malt ingredients. The countries like, China, South Korea, and Australia, are witnessing relatively quicker growth prospects and expected to dominate the market over the coming years. In 2015, China imported over ten million metric ton of barley and malt from the world. The growing demand and lower grain production, due to urbanization, limited farm land, and industrialization are the factors expected to lead to more imports in China. Asia-Pacific is the largest and the fastest-growing beer consumer and accounts for about 21% of the global malt production, out of which 80% is from China.

Companies are coming up with innovative beverages on the basis of the traditional raw materials that provide functional benefits.

Doehler is one of those key players who provides tailored non-alcoholic malt beverages.