The animal biotechnology market is expected to register a CAGR of 6.9% over the forecast period. Animal biotechnology refers to the branch of biotechnology, which deals with the molecular biology techniques for producing genetically engineered animals (whose genome are modified), in order to make them suitable for pharmaceutical, industrial or agricultural applications. The genetically modified animals have improved growth rates, synthesized therapeutic proteins, and are resistant to various diseases. Increasing R&D by the major market players, rising regulatory approvals, and the rising focus toward cloning and transgenic animals are contributing to the market growth. However, high cost of research and development, and the ethical issues associated with animal biotechnology products may adversely affect the market growth. 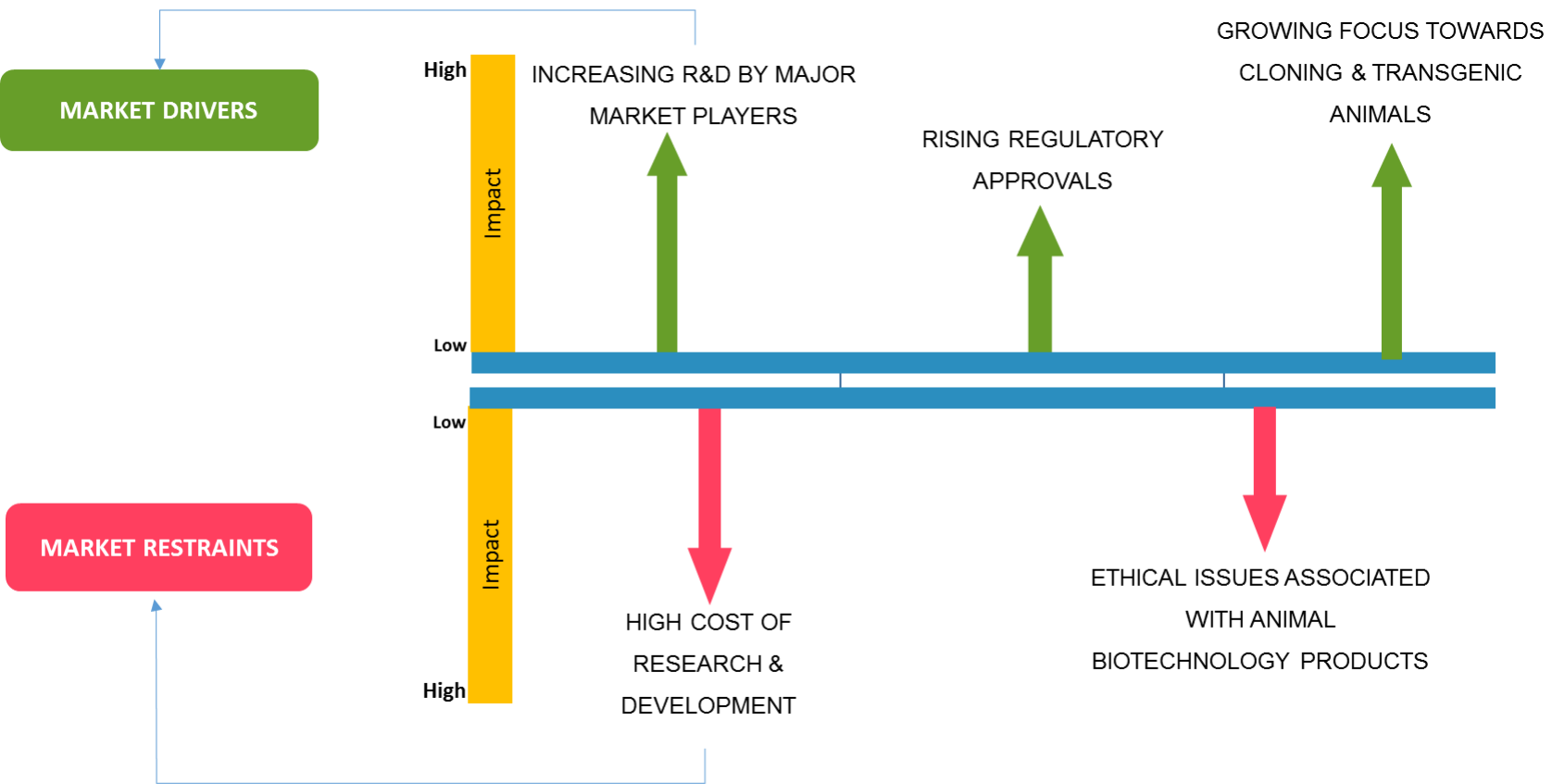 A significant rise in focus toward cloning and transgenic animals is expected to propel the market growth. The Annual Statistics of Scientific Procedures on Living Animals Great Britain 2017, published by the UK Government, states that in 2017, 3.79 million procedures were carried out in the United Kingdom involving living animals, out of which, 1.89 million were carried out for experimental purposes, and 1.90 million were counted under the breeding of genetically altered animals. As per the report published by the US Food and Drug Administration (FDA), in 2017, scientists have successfully cloned many livestock species, such as cattle, swine, sheep, and goats. Livestock breeding is an important aspect in the farms and most of the farmers prefer traditional mating, even now. However, owing to the fact that traditional mating is not as efficient when it comes to the production of as many offspring as possible, and that the method has certain risks involved, such as causing injuries to the animals; animal cloning has been observing a rise in popularity and acceptance, globally.

In addition to the aforementioned factor, increasing R&D by major market players, and the rising regulatory approvals are expected to propel the market growth over the forecast period.

The ethical issues associated with animal biotechnology are expected to restrain the market growth. Transgenic animals, as food items, can pose threat to certain religious beliefs, where some particular animals’ flesh are forbidden to eat. Such religious sentiments raise questions about the genetic basis or identity of the animals. The most common controversy and debate associated with animal biotechnology surrounds the animals themselves, as the majority of discussion takes place regarding the potential negative impacts on animal welfare through the process. For example, currently, some biotechnology techniques are inefficient at producing fetuses that can survive. Even the transgenic animals that have managed to survive, do not express the inserted gene properly, resulting in physiological, anatomical, or behavioral abnormalities.

North America is expected to dominate the animal biotechnology market over the forecast period, owing to the factors, such as the increasing animal meat consumption, growing prevalence of various animal diseases, and the rising per capita animal healthcare expenditure. According to the USDA (United States Department of Agriculture) data and the Livestock Marketing Information Center, the United States’ per capita pork meat expenditure has increased from USD 286.10, in 2012, to USD 331.27 in 2014. The data published by the American Pet Products Association, in 2018, states that the total pet healthcare expenditure has been estimated to be USD 72.13 billion, while that in 2017 was found to be USD 69.51 billion.

In addition, the growing awareness about animal health among the pet owners and the farmers, helpful initiatives by the government, good infrastructure, and the rise in product innovation (such as new vaccine launches) are some other factors propelling the growth of the Animal Biotechnology Market in North America.