The US proximity sensor market was valued at USD 1.13 billion in 2017, and is expected to reach a value of USD 1.68 billion by 2023, at a CAGR of 6.86% over the forecast period (2018 - 2023).The scope of the report includes technologies, like inductive, capacitive, and photoelectric, and is limited to end users, like aerospace & defense, industrial, automotive, and marine.

The industrial automation segment has been emerging to be a relatively more attractive space for investment by organizations across the globe. According to international trade administration, the United States is a major producer of industrial automation equipment. In 2015, US companies exported around USD 10 billion worth of products to foreign markets. Most of these sales went to highly developed markets with deeply embedded industrial bases and robust public infrastructure. As will be illustrated, however, the demand for automation equipment is also growing in developing markets, which are more geared toward commodity production and lesser-valued outputs. 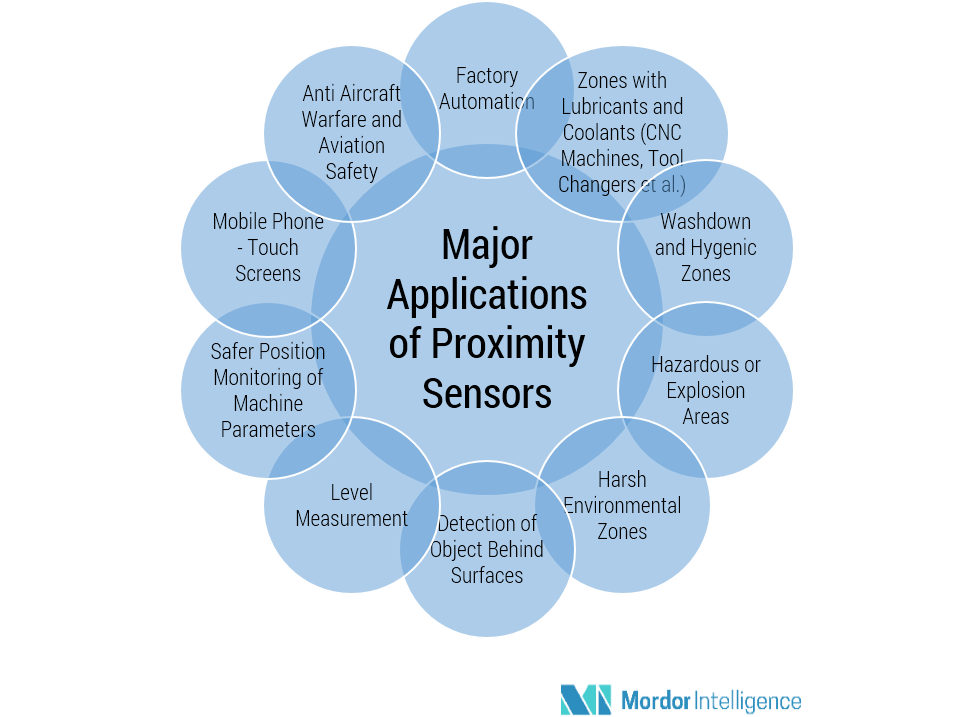 The automotive industry in the country is flourishing due to the advent of self-driving cars, and increasing demand for advanced and better vehicles, like SUVs and pickup trucks. The United States is the dominant country in the region, owing to the presence of major industries, established car manufacturers, a booming healthcare industry, etc. From an automotive point of view, the United States houses major players, like General Motors and Ford, while also having manufacturing plants of other manufacturers, like Hyundai and Kia. The United States has one of the largest automotive markets in the world and is home to many global auto parts and vehicle manufacturers. The US light vehicle production reached around 12 million passenger vehicles in 2016. In the near future, large area proximity sensing may influence the market growth.

Inductive Proximity Has a Major Market Share Among Sensors

The inductive proximity sensors are expected to be a cost-effective and a reliable solution for most of the applications in automation equipment and machinery. These sensors are not influenced by vibrations, water, oil, and dust, which makes them suitable for harsh environments. The major applications of these sensors include, machine tools, agriculture, and material handling systems. Inductive sensors play a critical role in obtaining quality and higher productivity from the automated process. As these sensors have no moving parts, their service life is independent of the number of operation cycles.

Inductive proximity sensors are used majorly in the industrial and automotive segments. These sensors are set to witness an increased growth rate in these industries as they are cheaper and efficient, and industries, like the automotive, require such technology to match the growing consumer demand. In the industrial segment, the harsh environmental resistance, robust nature, and extreme reliability are expected to witness an increased adoption rate for many applications. However, these sensors can only detect metal objects, limiting their functionality in other industries that do not make use of metal, and this can affect the growth of the US proximity sensor market.

The United States houses some of the world’s most established automobile manufacturers, like General Motors and Ford, who rely on cutting edge technology to deliver the best driving experience to consumers. This involves integrating the latest technological advancements with the automobiles being manufactured, and proximity sensor is one major technology that is being used for parking sensors, gesture recognition to make phone calls, etc. As consumer demand for safety rises (coupled with technological advancements and development of smart cars), the adoption of proximity sensors is also set to witness a significant rise, boosting the growth of the US proximity sensor market.

9.  Future of the US Proximity Sensor Market