The Laos seed sector analysis indicated a good potential for forage seed production and trade among countries in the South East Asian regions like China, Taiwan, etc. The export ban on rice has been removed, and the Laotian Ministry of Agriculture and Forestry aims to export 1 million metric tons of rice to its neighboring nations (like China) by 2020. Initiatives such as Consortium for Unfavorable Rice Environments (CURE), between Laos and International Rice Research Station (IRRI), has reduced certain risks and improved livelihoods within the country, as well as in the neighboring countries of South East Asia, specifically Bangladesh, India, Nepal, Cambodia, Indonesia, Philippines, Thailand, and Myanmar.

Paddy Cultivation - The Most Important Agricultural Activity in Laos PDR

Paddy cultivation is the most important agricultural activity in Laos PDR, considering the fact that Laos has one of the highest per capita rice consumptions in the world. The government of Laos has been involved in making the country self-sufficient, in terms of production. Therefore, it has officially banned rice exports from the country. It has been identified that 0.3 to 0.4 million metric tons of rice is unofficially traded across borders (with the neighboring nations), even amidst the official export ban. One of the major restraints for the Laotian rice market is the lack of access to advanced technologies, particularly post-harvest expertize, which leads to crop losses through inefficient storage and milling process. 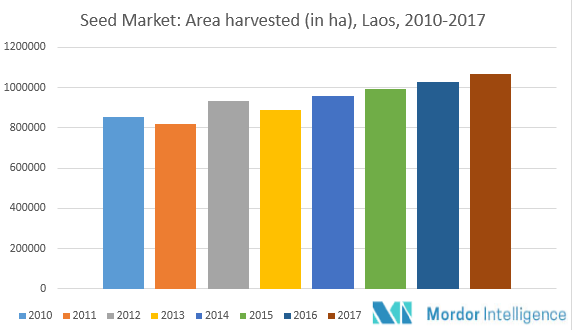 Vegetable Seed Sector is Expected to Grow in the Coming Years

Chilli and pepper form a major segment among the vegetables cultivated in Laos, and are widely used in Lao cuisine in soups, noodles, steamed rice, and meat-based dishes. Chillies are often cultivated as a part of home gardens too. Watermelon cultivation is witnessing a growth in the country, through an amalgamation of contract farming and leasing, where investors from China and Mongolia engage with Laotian farmers. Pak choi (also known as Chinese water cabbage), Lao eggplants, carrots, Lao basil, pumpkins, snake gourds, galangal, and Mexican coriander (along with other crops) are also cultivated in Laos in minor quantities.

Agricultural policies in Laos are aligned to make the country self-sufficient in terms of cereal production. As the nation has reached self-sufficiency in rice production, the export ban on rice is removed and the Laotian Ministry of Agriculture and Forestry aims to export 1 million metric tons of rice to its neighboring nations (like China) by 2020. There are collaborative research programs in Laos, with the International Rice Research Institute (IRRI), for the development of better varieties, suitable for the Laotian climate. The Bill & Melinda Gates Foundation (BMGF), the Australian Centre for International Agricultural Research (ACIAR), and the Government of Japan fund the R&D on improved rice varieties in the nation.

5.3.4 Threat of Substitute Products and Services

6.6 Melon, others (including Cantaloupes)