The air separation techniques across the world are constantly being re-engineered. Further, the ongoing optimization efforts are aimed at enhancing the overall operating efficiencies and increasing the production capacity, using a single air separation unit. These efforts aim at reducing the energy consumption and high-capital costs that are associated with the production of oxygen and nitrogen. Active R&D activities reduce the energy requirements of air separation unit in tonnage quantities. Therefore, the increasing R&D activities and the ongoing optimization efforts are expected to result in an increased use of air separation units in the region, particularly in the United States and Canada. Moreover, the growing demand for the industrial and specialty gases in the oil & gas industry, along with the increased purity level of gases, owing to the technological advancements in distillation and filtration capabilities, are some of the major factors driving the North America air separation unit market during the forecast period.

The end-user industries, such as petrochemical, fertilizers, and oil & gas, are expected to contribute to the significant level of industrial gas demand in North America, with United States leading the market. Nitrogen has heavy usage at every stage of the LNG supply chain, which involves purging, chilling, and liquefaction of natural gas; and inerting the LNG during shipboard transportation. The expansion of planned LNG terminals in the region is expected to be a major driver for increasing the nitrogen demand. In addition, the increasing establishments of commercial gasification facilities are expected to have a huge requirement of oxygen. The developments in the Oxyfuel combustion process are expected to further drive the demand for oxygen, during 2018-2023. Hence, the increasing use of industrial gases is expected to propel the growth of the air separation unit market in North America.

Inert and oxidizing gases are of foremost importance in the iron & steel producing industry, making the sector one of the major consumer of industrial gases. Hence, the growth of the iron & steel industry is expected to drive the air separation unit market. In North America, the steel production developments were sluggish in 2016, remaining roughly unchanged, at a level of 1 million metric ton. However, in 2017, the region's steel production resumed relatively strong growth. According to the American Iron and Steel Institute, the output in the United States until the beginning of March 2017 was up by around 4.5% from the previous year, with production predicted to rise on lower imports. The buoyant demand from the construction and energy sectors is leading to an increase in the capacity utilization rate. In Mexico, the steel production increased by 21.6% year-on-year in January 2017, while the Canadian steel production continued to show some signs of improvement in January 2017, due to the Canadian government's recent approval for energy pipeline projects. 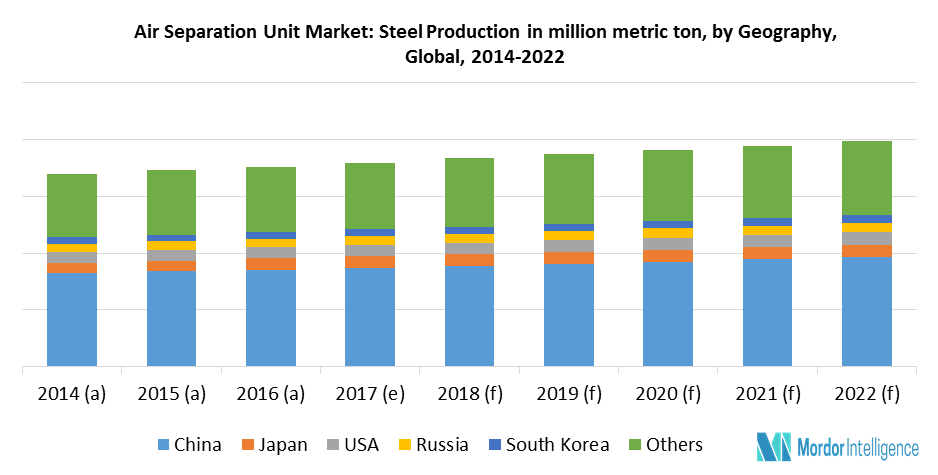 (*List of companies is not exhaustive. Please let us know if you are interested in any company profile)