The Mexican pressure sensor market is expected to register a CAGR of 6.45% during the forecast period of 2018-2023. The scope of the report is limited to solutions offered by the major players, including providers of different kinds of pressure sensors. The study also emphasizes on how the growth of the prominent end users in the country, such as the healthcare and automotive industries, is affecting the market.

Due to their diverse functionalities in various industry verticals, such as automotive, industrial, and consumer electronics, among others, pressure sensors find a broad range of applications. Due to a high degree of penetration in the majority of end-user verticals, the pressure sensor market has reached a certain level of maturity.  However, the  advent  of  MEMS  and  NEMS  technologies  and  their  subsequently growing  prominence  in  the manufacturing  of pressure  sensors,  has  led  to  the  emergence  of  potential growth   opportunities   in   the   Latin   American   region.   The   move   toward   a   more   pragmatic, technologically advanced   approach   for   production,   helps   in   achieving   the   set standards for miniaturization and enhanced performance for pressure sensors.

In addition, the Mexican  pressure  sensor  market  offers a  similar  trend to that of the global  market,  wherein the capacitive and piezoresistive sensing technologies are expected to dominate the market.

Despite advancements in technologies, the demand for handheld electronic devices with small form  factors  have  a  huge  influence  on  various  sectors,  such  as  automotive,  consumer electronics, aerospace, media, and retail. Industries, such as aerospace and bio-medical, are comparatively more stringent, in terms of size and weight requirements. The major players in these sectors do not hesitate to continue research for further miniaturization of equipment. Additionally, surface micromachining is providing a better trade-off between miniaturization and high performance. Furthermore, MEMS pressure sensors are gaining more traction in the aviation sector, stimulated by the benefits offered by miniaturization, which provide fine sensitivity and better linearity.

Demand for Piezoresistive Technology to Augment the Growth

As piezoresistive sensors are being implemented in a wide range of industries for a long time, many existing equipment are heavily reliant on these sensors for operational efficiency. This has further resulted in a higher availability of products with diversity, in the market. Piezoresistive ceramic pressure sensors perform well in corrosion and abrasion resistance, which is a major factor for automotive and other key industrial verticals. In addition, there have been numerous advancements in the MEMS technology, which has further benefited the growth of the piezoresistive pressure sensors toward gaining an increased market share.

Increasing Demand from Automotive Sector to Augment the Growth

Currently, the auto industry in the country is crushing its production and export records. The momentum from a slew of auto industry investments in the recent years has carried the industry to peak capacity, a trend that is likely to continue in the near future, as new plants and plant expansions come online. The bolstering demand in the automotive industry, buoyed by the implementation of critical safety laws, has been emphasizing the importance of installing pressure sensors in the engine, tire, or passenger compartment of different functions, thus contributing to the growth of the pressure sensor market in the country. 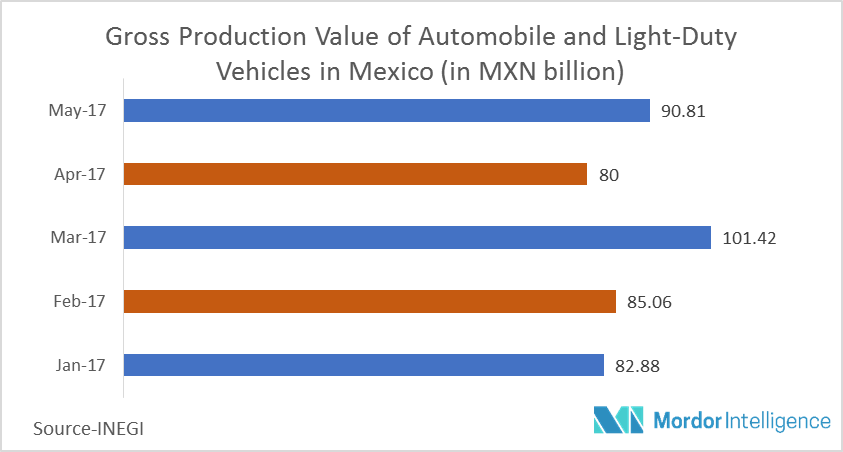 CONNECT WITH US RIGHT NOW