The Europe grease market is expected to grow at a CAGR of around 0.9% during the forecast period (2019 - 2024). The major factors driving the growth of the grease market in Europe are the development of advanced greases for high-end applications and the recovering construction sector in the region.

Grease is a semi-solid lubricant. Industrial and automotive greases are its primary categories. It is a mixture of a fluid lubricant, usually petroleum oil, and a thickener, usually soap, dispersed in oil. The base oil (petroleum oil) can even be a pre-used lubricant. The thickener plays an important role in the mixture as a sponge that holds the lubricant oil. The soap thickeners are produced by the reaction between a metallic hydroxide or an alkali and a fat/fatty acid or an ester. The different types of soaps used in production are calcium soap, aluminum soap, lithium soap, and sodium soap. Sodium soaps are stable at high temperatures, while lithium ones are resistant to both heat and moisture.

The construction industry in Europe has been on a recovering path after witnessing a downfall in 2012-13. Turkey, Spain, and the United Kingdom are expected to witness the fastest growth rates for the consumption of greases, owing to the increasing commercial and public infrastructure investments. The growing public-private partnership infrastructure projects and the modernization of the transport infrastructure in the Eastern European countries are expected to be the driving factors for the growth of the grease market in the region.

Lithium greases are among the widely used metal greases at a global level as well as in the European region. It is estimated that they contribute to over 50% of the total greases consumed in Europe, with a majority of lithium greases finding applications in the automotive sector. However, lithium complexes are facing hurdles due to the growing environment-related regulations in the region. The newer formulations, such as Boric acid thickeners, can be used as alternatives to lithium greases, which is another restraint for the growth of the lithium greases market in Europe.

Russia is the largest market, in terms of demand, for greases in the European region. It occupied a market share of almost 19% in 2017. A slowdown in the growth rate has been observed in 2016 – 2017, due to the fluctuations in the economy and the decline in the automotive production in the country. However, the consumption of greases has increased in 2018 with the significant increase in the production and the sales of new motor vehicles in addition to the improving economic conditions in the country. 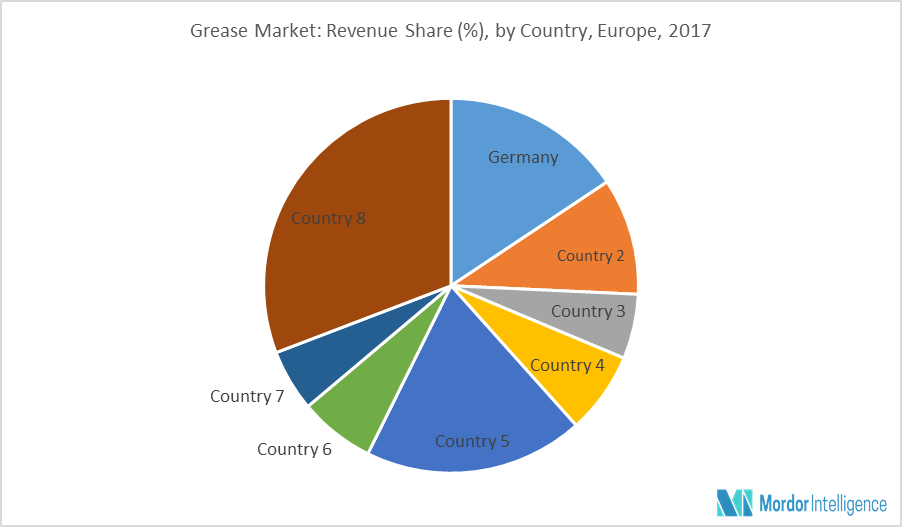