The Asia Pacific swine feed market is expected to reach a market size close to USD 61.1 billion by 2020, with an estimated CAGR of over 3%, during the forecast period. With the rise of income in the Asia Pacific countries, the demand of the pork meat (pig meat) is increasing year by year, which makes it an attractive market.

The rise of the income levels leads to the increase awareness of eating healthy and good food. The increasing level of disposable income of people in the Asia Pacific region is driving the swine feed market and companies like Zheng DA International Group, Kyodo Shiryo Company, Wen’s Group, New Hope Group, and Charoen Pokphand to provide improved and healthy feed to the swine farmers.

The growth in pork production and consumption has simultaneously supported the swine feed market growth, as feed cost is the major component, accounting around one-third of the total cost of pig meat production. Therefore, the price of feed ingredients has a substantial impact on the price of producing pork. The market is a vital part of the vast animal feed market, like the Asia Pacific. Modern feeds for swine consists largely of feed additives, such as protein supplements, mineral supplements, and vitamin supplements. With rising pork trade and concerns over food safety, demand for compound feed is expected to increase to ensure meat quality and safety.

Different classes of swine (pig) have a particular nutrient requirement. In general, feed for young pigs require greater dietary levels of most nutrients, such as protein than that for older pigs. As such, there are various diets available in the market or ones that can be mixed on farms, which are suitable for each class of pigs. 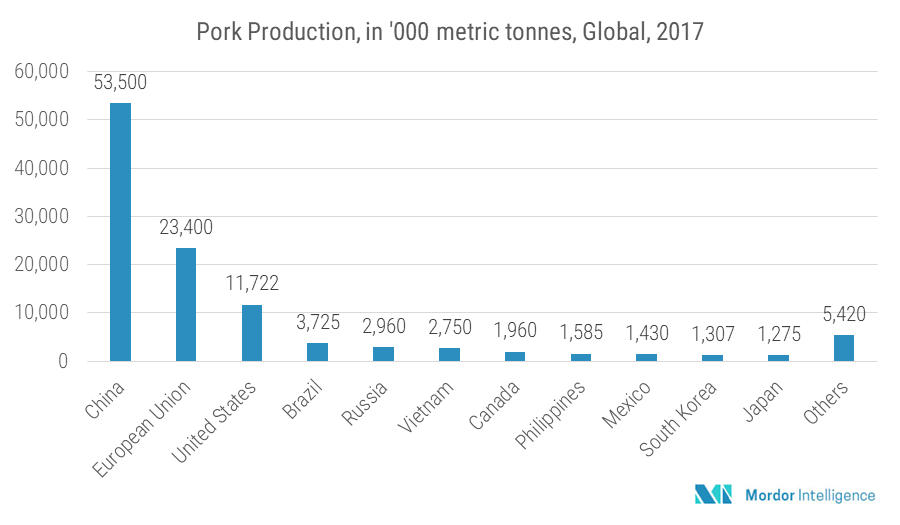 The Asia Pacific is estimated to be one of the remunerative markets for the growth of swine feed market, and it is projected to grow the highest during the forecast period. The awareness to consume high protein diets in emerging economies, like India and China are anticipated to lead the growth of the market in this region. Asia-Pacific was the largest consumer in the swine feed additives market in 2016, consuming 43% of the total market. Despite having the world's largest pig population, China is a net importer of pigs and has been increasing its imports during its economic development. According to the Food and Agriculture Organization (FAO), 50% of the global pig population is concentrated in China and followed by Europe and US.

The rise of domestic and international quick-service restaurants and widespread nutrient-related diseases are the major driving factors of the swine feed market in the Asia Pacific. Also, demand for quality meat products by consumers has significantly contributed to the rising demand for swine feed. Increasing industrial livestock production and technological innovations in the meat processing industry are creating demand for high-quality meat, thereby driving the market for swine feed. Increased concern for health factors have also created opportunity in the industry for organic swine feed.

March 2018:  A research study done on the African Swine Fever in Kansas State University stated that the fever could survive the ocean shipment procedure and reach the US

This report can be customized to meet the desired requirements. Please connect with our analyst/sales representative, who will ensure you get a report that suits your needs.