Oil & gas exploration and production (E&P) activities are complicated processes, and require sophisticated technology and equipment. Coiled tubing services are required in drilling, completion and production activities. The oil & gas industry is a highly volatile and cyclical market. The fall in commodity prices has had a ripple effect on the oil & gas value chain. Over several decades, the oil & gas industry has used active drilling rig count and creates the demand for oilfield services around the world. Coiled tubing (CT) units have been used in the development of oil & gas resources since the 1960’s, and has transformed into being a universal operation equipment, thereby easing the hydrocarbon production process. Well intervention is the primary application of coiled tubing and completion-related services is a driver of the market studied.

The collapse in oil prices in 2014 severely destabilized company revenues and forced sharp cutbacks in expenditure. With commodities staging a recovery following a multi-year price rout, activities in the oil & gas sector have begun to strengthen. With recovering oil & gas prices, oil & gas operator companies have increased investments for the development of oil & gas projects, which were earlier delayed or stalled. The coiled tubing service providers are expected to get benefitted from the same, with increased activities after recovery. The two-year oil price decline, subsequent plunge in activity, and downsizing of assets and staff by industry companies, appears to be over. Currently, owing to the rise in drilling activities across the North American region, the industry is recovering at a healthy pace. North American oil production, service/supply cost reductions, high-grading of prospects by operators, and operational efficiencies, have boosted oil prices and encouraged a rebound in activity. The North American coiled tubing services market is expected to register significant growth during the forecast period, on account of the increasing focus on developing unconventional hydrocarbons and increasing investments in deepwater and ultra-deepwater projects. 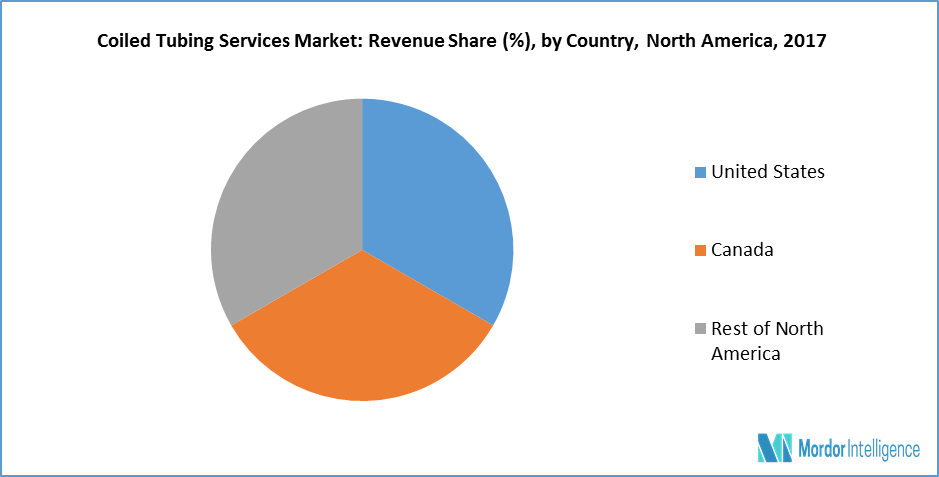 Despite the lower oil prices scenarios starting mid-2014, the quest for unconventional reserve production in the United States has resulted in the drilling of more wells than their actual completion. With pad‐based horizontal drilling in the country gaining traction, rig count on land in North America has become less meaningful. Rig efficiency in the country is on the rise and the number of wells a rig can drill each year is increasing at a significant pace. The US shale producers have drilled at a record rate over the past 18 months, an increase from 491 wells in May 2016 to 1246 wells in January 2018. Moreover, the United States is considered to be the hub for the development of new technologies, with a consequential build-up of coiled tubing units. As related companies are keeping the rates competitive, coiled tubing workovers are more viable. The coiled tubing services market in the country is expected to be driven by the expanding producing well base and an ever increasing lateral length in newly drilled horizontal wells.