Combined heat and power (CHP) or cogeneration is a clean and efficient approach to generate thermal energy and electric power from a single fuel source. In Mexico, petroleum, petrochemicals, chemicals, sugar mills, and paper & pulp industries have a significant cogeneration potential, although the greatest opportunities lie with the sugar production industry. Owing to the electricity market liberalization, investments in Mexico are expected to increase during the forecast period, enabling the market players to grab the opportunities from the available untapped CHP potential.

Mexico’s energy reform has been improving the country’s electricity industry by allowing private investment throughout the energy value chain. In 2016, Mexico opened up day-ahead and real-time trading in a new wholesale power market. The current electricity markets are a result of new energy laws that Mexico has implemented, to open the country's oil, natural gas, and power sectors, to private participation. The power sector reforms are expected to introduce competition into the generation side of the electricity industry. The reform provides significant opportunities for those involved with bringing new power generation to the market. It is expected that the generating facility of choice will be powered by natural gas, given the parallel reform effort to increase natural gas production in Mexico.

Foreign companies have been actively participating in investing in combined heat and power (CHP) projects in Mexico. Subsidiaries of Abengoa and GE Energy Financial Services, GE, announced in June 2017 that they will invest USD 180 million to develop the largest co-generation power plant in Mexico. During the next 15 years, it is estimated that Mexico will require a total investment of USD 123 billion in electricity infrastructure, to achieve the goals set by the government. Out of the total investment, 75% will correspond to investment in generation infrastructure. This offers a tremendous potential for companies involved in co-generation activities.

The Mexican economy has been sluggish; the GDP grew by only 2.3% in 2016, mainly due to lower oil production, tighter fiscal policies, decreased oil prices, and low productivity growth. Problems like widespread corruption and the unstable security situation continue to affect business and consumer sentiment, negatively. GDP growth is forecast to slow further in 2017, to about 1.5%. However, in 2018, it is estimated to get back at 2%. The slowdown in Mexican economy is expected to negatively affect the market growth in the short term by decreasing the investor's confidence, which will consequently slow down the market growth. 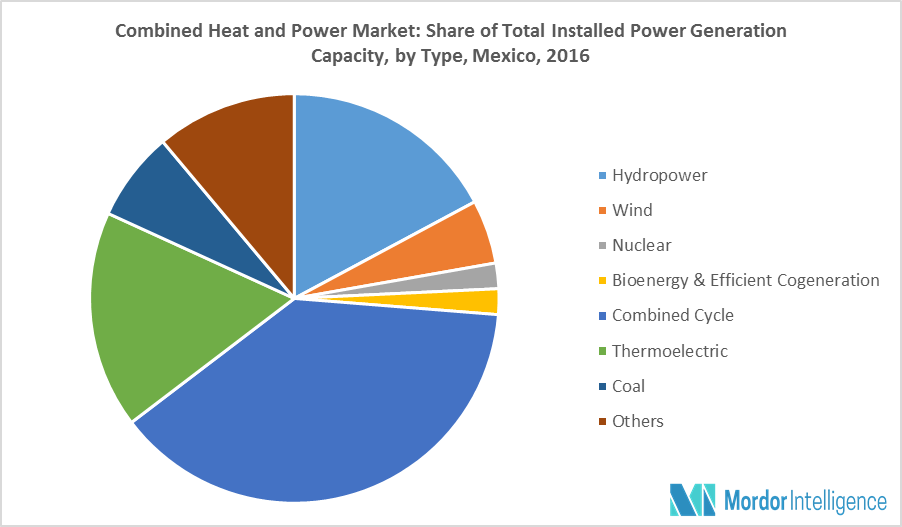