Argentina is one of the significant oil & gas players in South America, along with Venezuela and Brazil. In 2016, it was the largest dry gas producer and fourth-largest crude oil producer in South America. The oil & gas industry is undergoing a transformational change, after the opening of the upstream sector to foreign investment. YPF, Argentina’s state-run oil & gas producer is planning to invest around USD 30 billion, between 2018 and 2022, to increase hydrocarbon production, by approximately 5% per year. 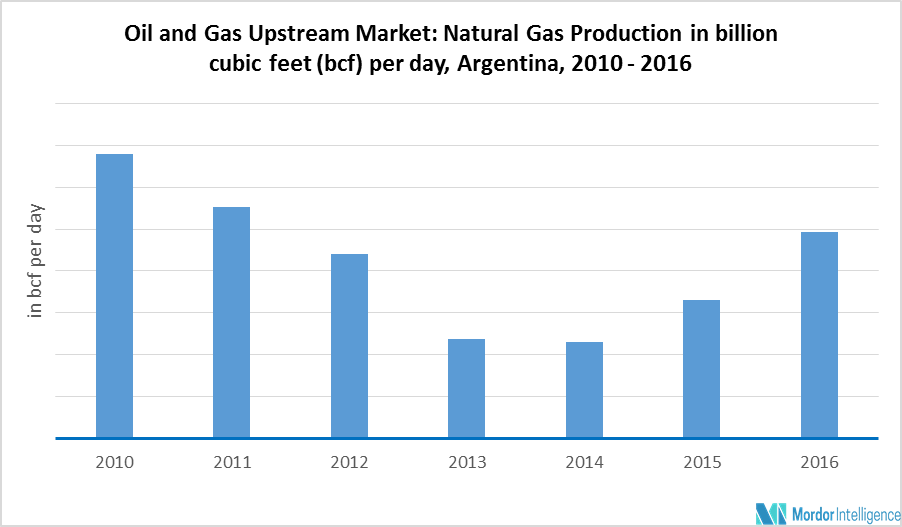 Argentina’s previous administrative policies have resulted in underinvestment in the upstream oil & gas sector. The new government is focused on making the upstream sector attractive, and it has developed a constructive pricing framework. The government reduced the high subsidies on natural gas, gasoline, and electricity prices, in 2016. The government is planning to eliminate natural gas subsidies by 2022, and increase the prices for upstream gas producers, to attract sufficient investment in production. The move is in line with the aim of becoming self-sufficient in terms of energy. As a result, the government-friendly business environment is expected to drive the country’s oil & gas upstream market.

Argentina has the second-largest shale reserves in the world. It has 23 trillion cubic meters of shale gas and 27 billion barrels of tight oil, which are attracting big oil & gas companies, such as Exxon Mobil, Statoil, Petronas, and Sinopec, to form a partnership with YPF to explore the reserves. Argentina’s YPF, along with Norway’s state owned oil and gas company Statoil, has signed a deal to jointly explore shale oil & gas resources in the Vaca Muerta formation. The companies are expected to invest around USD 300 million and USD 500 million for the exploration.

Offshore Development – Opportunity for the Market

In the past 15 years, Argentina did not have any major offshore development. The Ministry of Energy for Argentina, is planning to launch an auction process for around 6 to 10 offshore exploration blocks, toward mid-2018. In 2017, Norway’s Spectrum did a seismic survey in cooperation with YPF SA, Argentina’s state-run oil firm. There is a high probability of discovery of oil & gas formation in the area. Most of the fields are based in Austral Marina, Malvinas Oeste, and Argentina Norte basins. The auction is expected to help in the development of Argentina’s offshore oil & gas fields, and hence, the upstream market.

In November 2017, the inflation rate in Argentina was above 20%. Further, due to the removal of gas subsidy, along with rising inflation, the labor in the country is demanding higher wages. As a result, the cost of doing business is high in the country.