The Republic of Algeria is the largest natural gas producer and second largest oil producer after Nigeria in Africa.   The oil & gas sector is the backbone of Algeria’s economy, accounting for almost 35% of the GDP and two-thirds of the total exports. Algeria has five crude oil refineries and one condensate refinery, with a total nameplate capacity of 562,000 b/d. The country's largest refinery, Skikda, is located along Algeria's northern coastline and is the largest refinery in Africa. It has the capacity to process 300,000 bbl/d of crude oil and accounts for more than half of Algeria's total refinery capacity. Skikda processes the Saharan blend, which derives from the Hassi Messaoud oil fields. Algeria's two other coastal refineries, Arzew and Algiers, each have the capacity to process 60,000 bbl/d of crude oil. The country's inland refineries, Hassi Messaoud and Adrar, are connected to local oil fields and supply oil products to nearby areas. 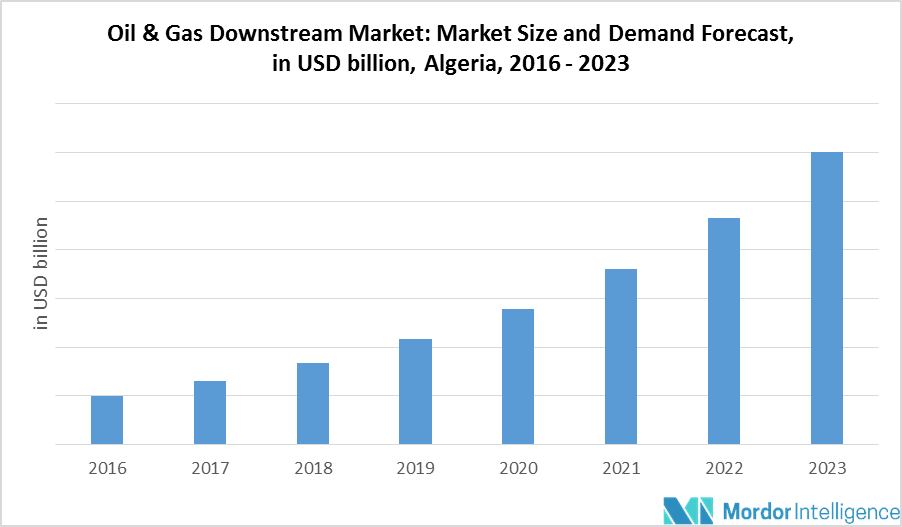 Due to the country’s sensitivity to political events and the global economy, energy demand and trade remain extremely volatile in the country. As of 2016, the total refinery capacity of Algeria has remained almost unchanged since 2013, with a refinery capacity of 650,800 b/cd. Further, the total output of petroleum products decreased to 622 b/d from 655 b/d in 2014. In such a bleak oil & gas scenario, Sonatarch, the national oil company, has taken necessary actions and is attempting to revitalize the sector by 2022. In addition, Sonatarch holds and controls about 80% of the hydrocarbon sector in Algeria. Therefore, any initiative taken by the company would affect the sector significantly.

Algeria has attracted 49 offers from international energy companies to build four refineries worth a total of USD 6 billion. Algeria's national oil & gas company, Sonatrach, dominates the country's hydrocarbon sector, owning roughly 80% of all hydrocarbon production. By law, Sonatrach is given the majority ownership of oil & gas projects in Algeria. Sonatrach has already increased its refining capacity in the past few years by renovating three plants, including the Skikda, Arzew, and Algiers refineries, and is trying to raise revenue after the crash in oil prices cut its energy earnings by half. Two new refineries, one in Tiaret and a second in Hassi Messaoud, are on schedule to start refining 5 million metric ton of crude oil each year. These two refineries are still in the bidding phase for further construction work. Moreover, Algerian authorities are alarmed by the rising bill of refined products, which hit USD 2.5 billion in 2017, up from 800 million in 2016, due to a surge in domestic demand and the lack of a national refining industry. Hence, as Algeria feels the heat of an economic and financial crisis, propelled by the oil price plunge, the country seeks to reduce its oil import and strengthen its refinery infrastructure.

REASONS TO PURCHASE THE REPORT