The market provides products such as food, apparel, furniture, jewelry, and various others. Apart from this, the stores can be classified into the convenience store, specialty retailer, internet retailing, and various others. The scope of our study is geographically limited to North America, Europe, Asia Pacific, Latin America, and Middle East & Africa.

The retail market is mature and highly competitive in the developed economies of Europe and North America. On the other hand, the developing economies of Asia-Pacific, Middle East, and Latin America have been instrumental in driving the market growth. Consumer spending, which typically accounts for around two-thirds of the GDP, has been a key indicator of the health of the retail market. Moreover, the increasing strength of online shopping has been a major driver. Apart from this, the growing smartphone penetration across countries is driving the e-commerce channel. Also, Internet of Things (IoT) is reshaping the retail industry. It is being deployed to revolutionize the industry. However, price variation between online and brick & mortar stores can challenge the retail market growth.

Internet Retailing Is the Fastest Growing Segment in Retail Industry

Internet retailing is the modern way of shopping. With growing penetration of smartphones and mobile devices and the internet services, e-commerce has emerged as a major shopping platform in the world. Although the sector’s market size tripled over the past three fiscal years, internet retailing accounted for a mere 1.5% of the total retail sales in most of the countries all over the world. Mobile-first sites, dedicated apps, emerging payment methods, and other tools are making shopping on smartphones much easier. It is estimated that e-commerce accounts for nearly one-third of online retail sales in the United States. 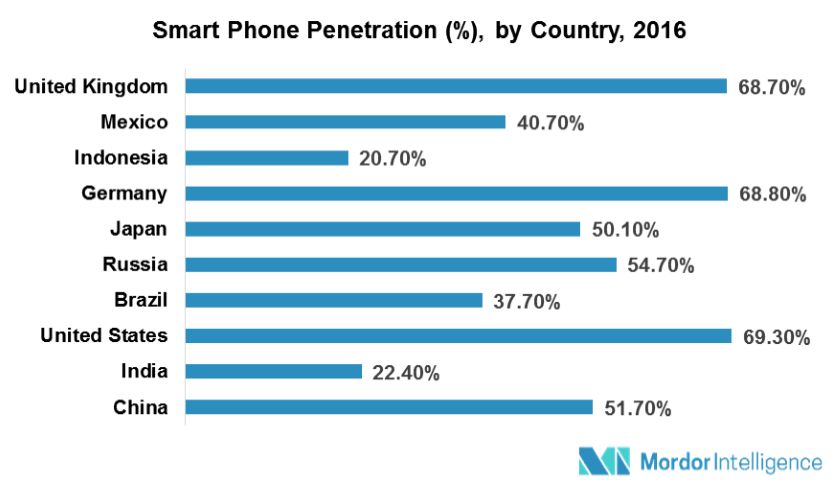 As rural and urban households witnessed a steady growth of disposable incomes, the spending power of the Chinese population has also increased dramatically and the retail market has matured into one of the largest and still growing consumer markets worldwide. It is highly competitive and diversified, and the market shares of the leading Chinese retail chains were receding over the past few years. In India, government policies, like FDI up to 100% allowed in single-brand retail and FDI up to 51% in multi-brand retail is further expected to fuel up the competition in the country’s retail market.

Moreover, the retail market in Japan boasts of 52,417 convenience stores and 240 department stores. It is driven by M&A’s and increased cross-border investment and international cooperation, which are presenting opportunities for the country to develop local markets and gain benefits from production networks in Asia.

Key Developments in the Retail Industry