The North American swine feed market was estimated at USD 17,712.66 million in 2017. The industry is expected to register a CAGR of over 2.26% over the forecast period.

Pork is the most popular and widely consumed meat source worldwide, majorly in Europe and Southeast Asia. Pork is cheaper than other meat sources, which is a major factor for its high consumption. In addition, its palatability, fat content, and texture fascinates the consumer. The large middle-class population, growing disposable income, and changing consumer preferences are levitating the pork demand. Pork production and consumption are very high in developed regions, such as North America and Europe, and in developing countries, such as China and Japan. However, due to religious reasons, its demand has not picked up in the Islamic nations. Pork is a highly nutritious meat as it contains high protein, and less fat and cholesterol, as compared to beef and other meat sources. It provides a protein-rich meat source for consumers at a low cost, which makes it an affordable animal meat source for consumers in the developing regions. Asia and Europe dominate the pork production and export in the world. China is leading the pork consumption, followed by Europe and the United states. 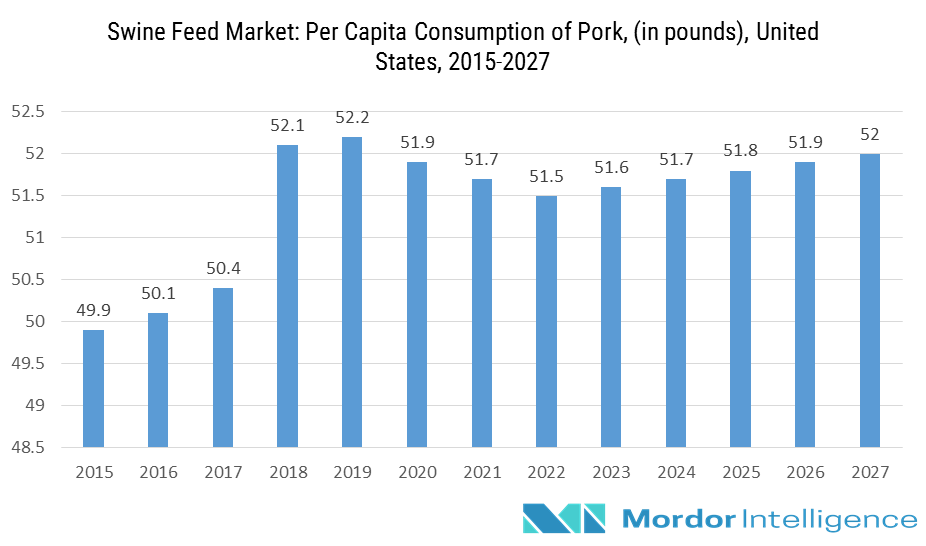 Corn, soy bean meal, dry distiller’s grain, and supplements are the common swine feed ingredients. Soy bean and corn are rich protein sources and they, along with other micro-nutrients, help in increasing carcass muscle and weight. The outcome of swine production is directly affected by the compound feed ingredient prices. The major ingredients for the swine feed industries are corn meal and soy meal. The fluctuation in the prices of commodities alters the swine feed costs. For the manufacturers, about 65-75% of the variable cost is associated with feed cost. Fluctuating soybean, corn, wheat, and millets costs are widely affecting the swine product costs. A 10% increase in corn price increases the feed cost by USD 0.48 and a USD 10 increase in soy bean price increases the feed cost by USD 0.32. The increased cost of soy and corn has forced producers to select other alternative ingredients, depending on their ready availability and cost. The population has grown tremendously, which has created demand for agricultural produce. The increased demand and low production of commodities has led to the price rise, which is affecting the swine feed market.

Reasons to Purchase the Report: