The global alfalfa market is expected to record a steady CAGR of 5.2% during the forecast period (2018 – 2023). North America holds the largest market share of nearly 30% and it is expected to retain its position throughout the forecast period. However, Asia-Pacific is likely to witness the fastest growth during the forecast period. The US dominates a large portion of the alfalfa exports market and is the second largest exporter after Spain. The dairy product prices have been declining for the last two years, thereby, reducing the market for use of alfalfa in the dairy segment. On the other hand, the demand for alfalfa has surged from the Middle East and Asia, which has resulted in a rise in the export of alfalfa. 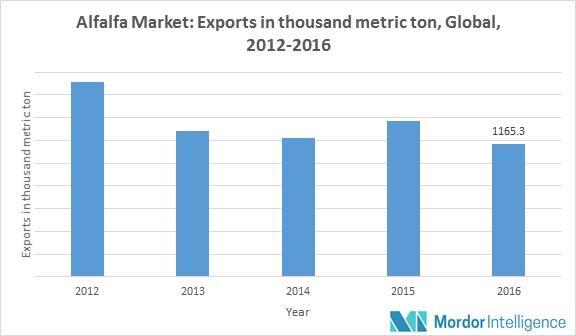 Drought Affects the US Alfalfa Production

New varieties, like low-lignin alfalfa, are expected to increase the popularity of alfalfa among the growers as it is expected to give higher quality forage with the same amount of harvest.  S&W seeds, one of the leading seed companies, introduced 45 new varieties of alfalfa seeds developed for multiple pest resistance, forage quality, and yield. The company aims to capture a larger market through this development and it also aims to become the go-to provider for alfalfa seed.