Over the last few years, the trend in the US power EPC market is the replacement of equipment for enhanced efficiency, increased power plant capability to handle multiple fuel types, introduction of carbon capture systems to meet the environmental regulations, and enhanced cooling systems for improving the overall efficiency. The dependency on coal has declined from 47% in 2005 to 31% in 2016. Further, the country has almost stopped the construction of coal-based power plant and the focus is more on plant upgrades for existing plants.

The country is phasing out coal-based power plants and replacing them with natural gas-fired power plants. The replacement is in response to the low cost of natural gas and implementation of environmental regulations. The cost of natural gas delivered to power generators declined from an average price of USD 5.00 per million Btu (MMBtu) in 2014 to USD 3.23/MMBtu in 2015, and averaged USD 2.78/MMBtu from January 2016 through October 2016. The nation is planning to increase the natural gas-fired generation capacity by 20 GW in 2018. After 2020, 70% of all new power generation capacity is expected to come from natural gas-fired power plant. The replacement trend is expected to drive the demand for power EPC in the country. 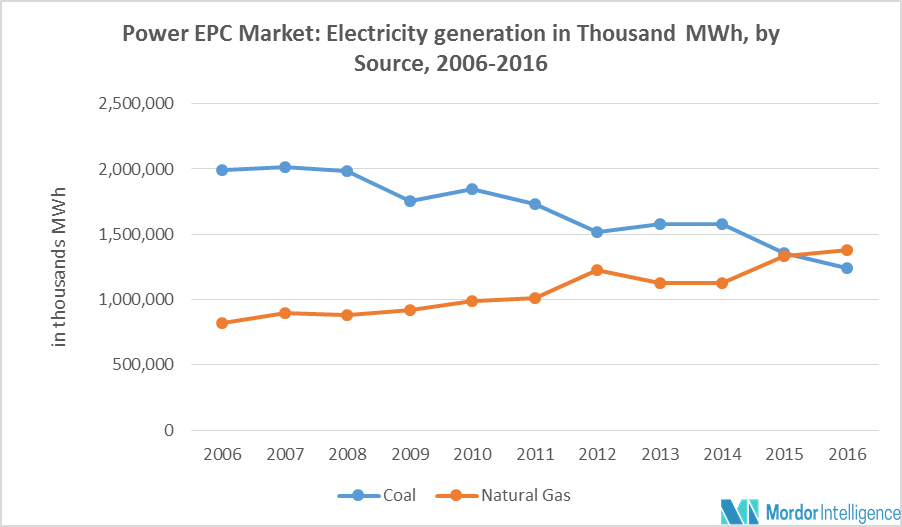 The nuclear power plant projects in the United States have been running far over-budget and behind schedule. Utilities facing difficulties to come up with financing after the major engineering company Westinghouse, declared bankruptcy in 2017. The biggest source of delay is expected to be the AP1000’s innovative design and challenges owing to the untested approach. Also, the construction of a Georgia nuclear power plant was paused for eight months due to delay in right signature and paperwork needed to ship a section of the plant from a factory hundreds of miles away. As a result, financial problems for nuclear power plant and delay in projects have been restraining the US EPC market.