To maintain operational efficiency and meet stringent emission norms from the power plants, the trend of applying continuous maintenance, repair, and overhaul (MRO) services is rising. The global gas turbine MRO market in the power sector is expected to witness a moderate growth during 2018 - 2023 (the forecast period), in the midst of aging power infrastructure, and growing conversion of coal and nuclear-based power plant to gas-based power plant. On the contrary, the growing renewable mix in the global electricity generation is expected to act as a restraint for the MRO market. North America is expected to account for the largest market share during the forecast period. Moreover, Asia-Pacific is emerging as the fastest growing market.

The existing fleet of the electric power generation capacity has a wide age range. Most of the coal and nuclear-based power plants were built during 1970 and 1990, with peak addition in 1980. The gas-fired power plants have been known to be a bridge between coal and oil age and the renewable-based future. In the most recent wave of additions, the gas-fired power plants witnessed a peak in 2002, with the majority of them added between 1998 and 2008. Thus, the equipment installed in approximately all the gas-fired power plants, across the globe, are expected to require significant MRO services during the forecast period. Moreover, in the next ten years, USD 256.77 billion of investment is anticipated for the commissioning of 17,680 gas turbines (excluding micro turbines). Additionally, because of the advantages offered by gas-fired power plants, such as low carbon emission and high efficiency, many of the coal power plants are being replaced or retrofitted by gas-fired plants, which, in turn, is expected to increase the demand for gas turbine MRO services during the forecast period.

According to the International Energy Agency (IEA), developing countries in Asia accounted for two-thirds of the global energy growth in 2017. Buoyed by the robust increase in demand for energy and the rapid capacity expansions in the power sector, the power plant service activities in Asia-Pacific continues to soar high. Asia-Pacific is witnessing a significant transition from nuclear and coal-based power generation to gas-fired power generation, which is expected to present a tremendous market opportunity for the growth of the gas turbine MRO services market in Asia-Pacific. However, North America is expected to hold the largest market share during the forecast period, with Europe emerging as another significant market for MRO services in the power industry.

The US market is experiencing an upsurge in the establishment of small-scale turbines, with an increased focus on flexibility and efficiency. By 2038, the natural gas-fired generation facilities are expected to fuel 348,000 MW of gas-fired capacity to the US grid. The natural gas-fired combined cycle gas turbine (CCGT) power plants are expected to account for over 50% of the power generated in the United States. According to EIA, power plants fueled with natural gas are likely to account for 70% of all new generation capacity after 2020. With the increasing adoption rate of gas-based power generation in the United States, the demand for MRO services in the power sector is expected to increase during the forecast period, significantly. 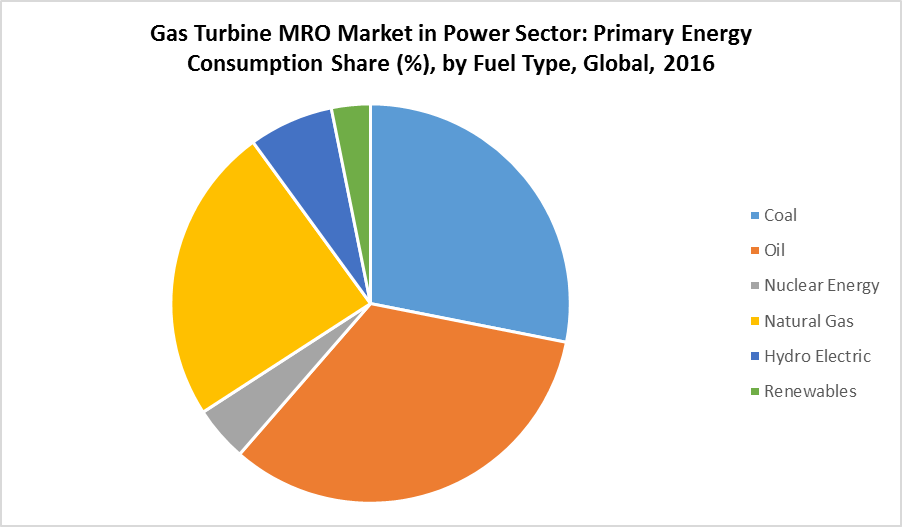