The Asia-Pacific oil & gas industry showed sign of revival in 2017, as the crude oil price recovered and same was followed by the well intervention market. Australia, India, and China led the drilling activity in the region in 2017. China and India are the largest consumer of oil & gas in the region, and they are planning to reduce the dependency on oil & gas imports, respectively, and increase domestic output to meet the rising demand for fuel. As a result, the oil & gas activity is expected to increase, and hence, the well intervention market is expected to grow. 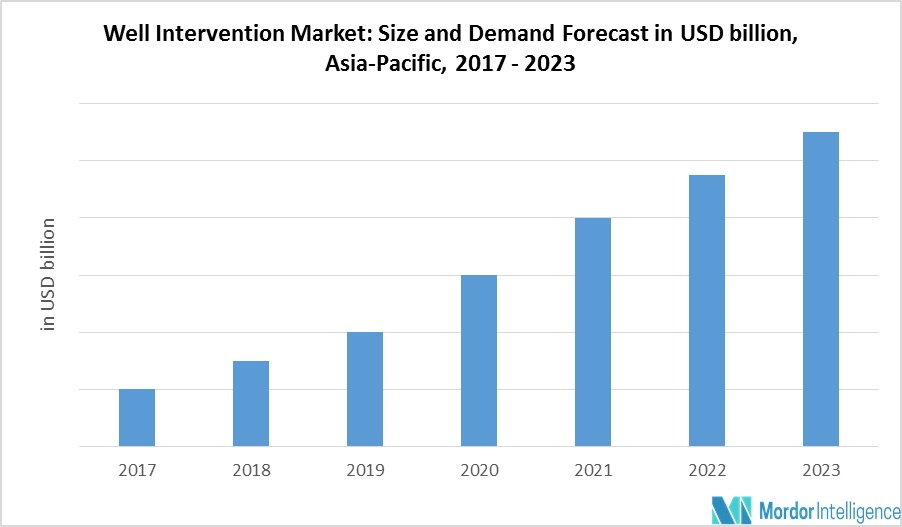 The Indonesian oil & gas industry has been negatively impacted by the drop in crude oil price, changing regulations, competition from neighbors, such as Malaysia, who are proving more attractive to foreign investors. The oilfields are matured and are expected to deplete in the forecast period. Lack of drilling success in the past has further weakened the outlook for investment. As a result, the demand for well intervention is expected to be restrained in Indonesia.

China is the largest market for well intervention in the region. The country is planning to reduce its dependency on natural gas import and has started to exploit its shale gas reserve to meet the domestic demand. Sichuan province, the most important area for shale gas, is expected to produce more than 4.5 billion cubic meters of gas in 2018, increasing the demand for hydraulic fracturing, a type of well intervention. The country has urged NOC’s and state-owned energy companies to optimize extraction action plans for ensuring increasing domestic natural gas production. Other countries, like India, are planning to reduce crude oil imports by 10% by 2022 from 2017. Also, the government has made the entry for foreign companies comparatively easy as per the new licensing policy. As a result, both China and India provide ample opportunity for well intervention.