The South America epoxy resins market is expected to witness a CAGR of 4.87%, in terms of revenue, during the forecast period, 2018 to 2023. Currently, Brazil dominates the regional market in terms of revenue, and accounted for more than 57% of the regional share, as of 2017. Epoxy resins are a group of synthetic resins, which are used to make adhesives and plastics. Owing to their versatility, high resistance to chemicals, durability, excellent adhesion, toughness, high electrical resistance, strong durability at both low and high temperatures, and ease they offer while pouring on cast without forming bubbles, epoxy resins have become an integral part of various commercial and industrial sectors.

Epoxy resins are extensively used as insulation material for electronics and electrical applications, which require protection in extreme and dangerous environments (such as chemical plant equipment, deep sea, and engine management). They are used as sealants, coatings, potting compounds, adhesives, moldings, and impregnants to produce void-free insulation around components. With the rising demand for and popularity of high-performance coating, bonding, and sealing applications, the demand for UV curing epoxy formulation is increasing, which is further driving the global epoxy resins market and the market for hardeners in the epoxy resins market.

Bisphenol A (BPA) is an organic compound, which is colorless in nature. Polycarbonates and epoxy resins are the major products derived from BPA. The market value of BPA is driven primarily by the end-user industries of polycarbonate and epoxy resins. In South America, rising consumption of BPA-based products, increasing demand in the automotive sector, and growing demand in the construction industry tend to catalyze BPA production. 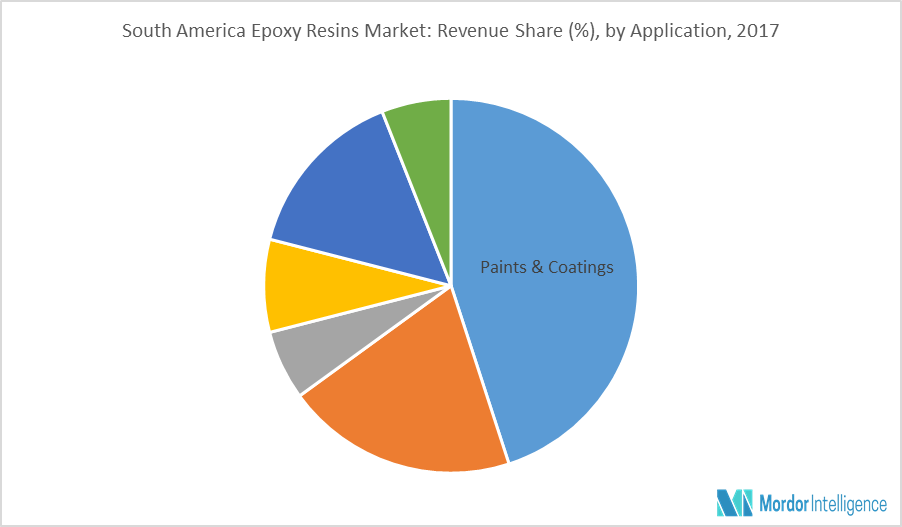 Brazil dominated the South American epoxy resins market, due to high demand from paints & coatings and electrical & electronics industries. Brazil accounted for about 57% of the total epoxy resins market, in terms of revenue, in 2017. Increasing demand for epoxy resin-based composites from the aerospace industry is expected to drive the market in the region. Epoxy resin-based composites provide flexibility in designing aerodynamically efficient airframes. They also reduce the overall weight of an aircraft.