The North American feed probiotics market was estimated at USD 64.25 million in 2017 and is expected to register a CAGR of 10.72% during the forecast period of 2018–2023. The United States accounted for the largest share, at around 52.2% of the North American market, while Canada is estimated to register the fastest CAGR through the forecast period.

Demand for Probiotics in North America

Probiotics are widely used in farm livestock, companion animals and in aquaculture, as they are principally associated with reducing clinical disease and increasing growth rates. The United States probiotic market for poultry is likely to grow at a steady rate owing to increase in meat consumption, particularly chicken.

In this regard, poultry occupies the larger market share, followed by swine and ruminants.

Lactobacilli is one of the most largely commercially available sources of probiotics in feed. Countries of North America are expected to become major markets owing to the high awareness among consumers and it will contribute to the growth of the North American probiotics in the feed market.

On the basis of geography, the United States dominates the region, followed by Canada and Mexico. 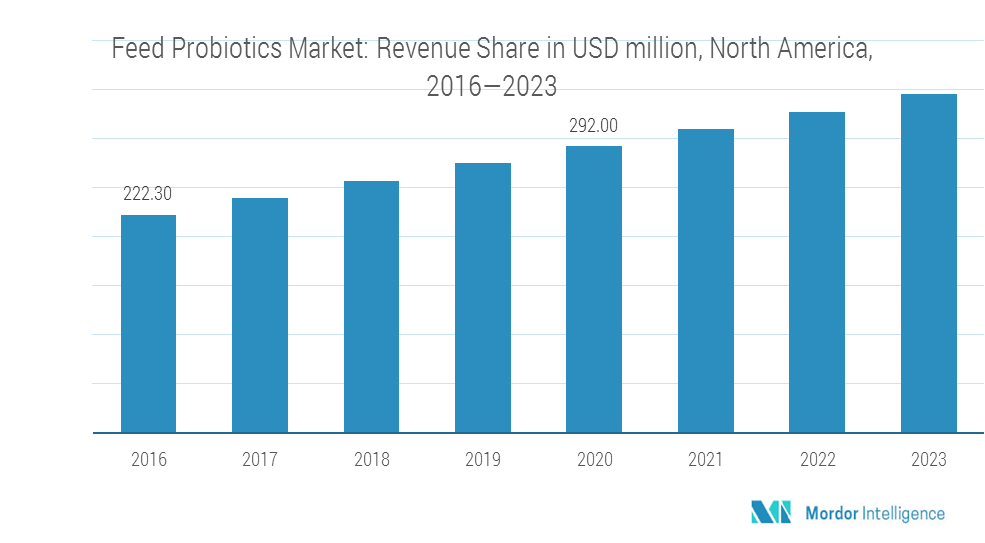 The demand in North America for probiotics in feed is growing significantly, due to the awareness about animal health among breeders, increasing demand for nutrient-rich feed for animals, and expanding demand for quality animal feed products. Food safety has become an important issue for many governments around the world, especially in North America. Consumers of North America are now more aware & informed and are giving importance to the extrinsic quality attributes of the meat they consume and conditions under which their meat is produced. Certain pathogenic and parasitic contaminations in meat products such as salmonella, listeria, and E. coli, along with various disease outbreaks in livestock animals such as swine flu and foot and mouth disease in the past decade have raised concerns over meat quality and safety.