In India, the government has been actively providing boost to the housing construction, where it aims to provide home to about 1.3 billion people. The country is likely to witness around USD1.3 trillion of investment in housing during the next seven years, where the country is likely to witness construction of 60 million new homes in the country. The availability of affordable housing is expected to rise around 70% by 2024 in the country. Hence, with such boom in housing construction activities in the emerging economies of Asia-Pacific, the demand for paints & coatings in the region is projected to increase substantially during the forecast period.

The VOCs released from solvent-borne coatings is the core reason for the switch of manufacturers to water-borne coatings. Also, other properties, like low odor, more durability, and more block resistance make waterborne coatings more preferable. There are many regulations from several governments, which supports water-based coatings. In recent times there has been a propensity to seek coatings with high usability, and water clean-up characteristics among the users, water-borne coatings meet the requirements, and also facilitate low viscosity, without the addition of low-molecular weight monomers.

China to Dominate the Market Growth

China is the largest market for architectural coatings, accounting for around 60% of the regional market. China’s real estate sector has been growing rapidly with increased investment by the government. In 2016, property prices in China rose by about 30.0% due to increased activity in the real estate space. In China, the housing authorities of Hong Kong have launched a number of measures to push-start the construction of low-cost housing. The authorities has projected the capital expenditure in construction of HKD 23,923 million in its proposed budget for 2018-19, i.e. 7% higher than the budget allotted for the FY2017, in order to construct more affordable flats. The growth in construction is expected to boost the architectural coatings market in the country, during the forecast period. 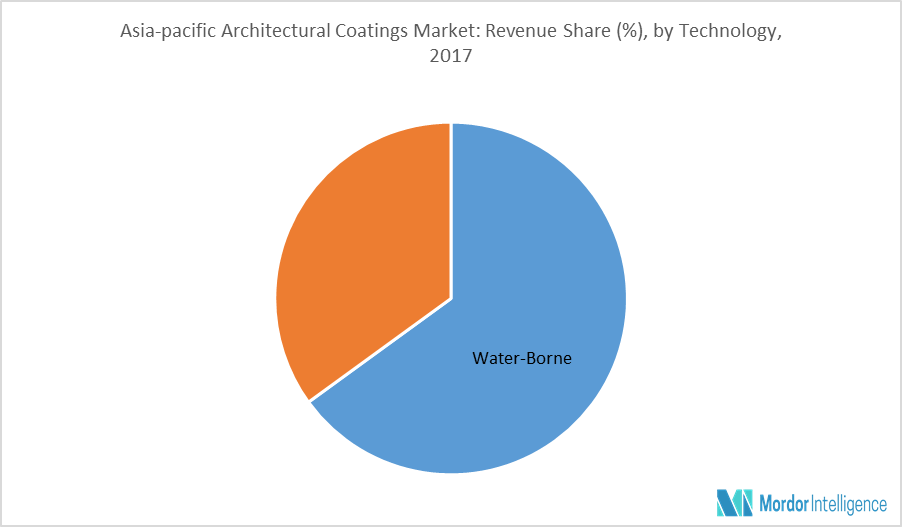