The crude price started to increase after mid-2016 and the offshore oil & gas industry started to stabilize with less decline in offshore rig count, as compared to that in 2014 and 2015, and hence, similar trend in demand for mobile offshore drilling units (MODUs). The number of MODU purchased increased in 2017, both in terms of transaction and value. Crude oil price crossed USD 60 per barrel mark in November 2017. Opening of coastal water in the United States for exploration and production, and recovery of Brazil oil & gas industry, along with increasing crude oil price, are expected to increase the demand for MODUs, during the forecast period. 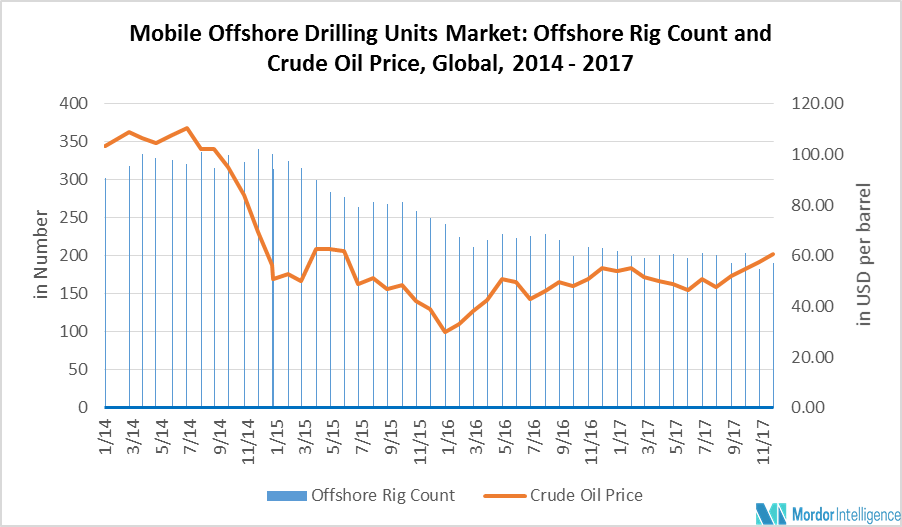 Golden Triangle - One of the Largest Markets for MODU

The deepwater drilling market is expected to rebound in the near future due to increased activity in the Golden Triangle – Gulf of Mexico, Brazil, and West Africa. Chevron’s Ballymore and Shell’s giant Whale discovery in the Gulf of Mexico represents the sign of regional deepwater revival after a long time, without any major discovery. The discovery of Egypt’s mammoth offshore natural gas field “Zohr” is expected to increase the demand for mobile offshore drilling units. Several large offshore drilling projects countries such as Mozambique and Nigeria are further expected to drive the MODU market.

Recovery in the Brazilian Offshore Industry - Driving the Market

The Brazilian offshore oil & gas industry has been on a setback due to lack of investment in the past few years. The new conservative government in the country has introduced several reforms, such as ending Petrobras’ monopoly over the countries prolific hydrocarbon resources and has opened the hydrocarbon reserves to foreign companies. Several foreign companies, like ExxonMobil, CNOOC, Repsol, etc,. have already acquired stakes in both post-salt and pre-salt blocks, and are likely to start exploration in the near future. Around 14 deepwater projects are expected to come by 2020 in the country. The country is aiming for additional oil production capacity of around 2 MMb/d by 2027, that too mostly from deepwater. As a result, the tender for MODUs, especially drillships in the country, is expected to increase.

Oversupply of Floaters and Jack-up – Restraining the Market