The South America Non Lethal Weapons Market is expected to register a CAGR of over 5% till 2023. South American countries have been undergoing extreme economic crisis in recent years. Many of the major economies led by Brazil are undergoing a period of recession and this has affected the spending capacity of both the government and the population. The recession has been majorly brought about the commodity price crash and as most of the South American economies are net exporters of commodities, this has affected their finances. The tough situation has also been a major factor for the rise in discontent, protests and demonstrations. In Brazil, there has been large number of protests and demonstrations in 2015 over corruption scandals and resulting in a huge level of discontent there amongst the people. The government, in order to handle such protests, has been ramping up their acquisitions of equipment to control the crowds.

Further, crime levels have risen in recent times; with Venezuela and Brazil continue to be the most violent South American countries. The civilian and law enforcement market for Non Lethal weapons in South America will register moderate rates of growth, while the market for the same in military would be stagnant. North American manfacturers of non lethal ammunitions are expected to accont for majority of the deals during the forecast period 2018 - 2023. 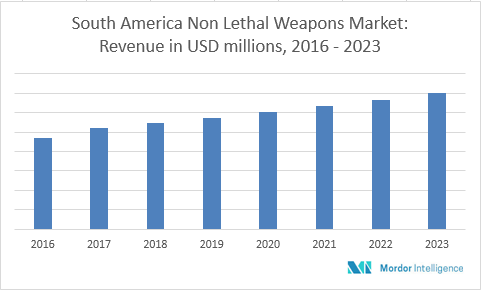 May 2018: Vista, maker of Ammunition and Recreation Gear, Plans to Sell Off Gun-Making Unit for a better brand image and public acceptibility.

This report can be customized to meet the desired requirements. Please connect with our analyst, who will ensure you get a report that suits your needs.