Flame retardant chemicals are commonly used in building materials to meet the important fire safety standards and codes. Flame retardant chemicals increase the threshold temperature of the material at which it catches fire, and reduce the rate of spreading of fire along with providing the critical escape time required escaping from the surroundings. Construction activities in all 19 EUROCONSTRUCT countries was expected to rise by 3.5% in volume terms in 2017, owing to growing demand in construction in these countries. Furthermore, the market is further expected to rise by around 6% through 2020. Hungary was estimated to register the maximum demand of more than 25%, followed by Ireland (+15%), Sweden (+10%), and Poland (+9%). In Germany, construction activity increased in 2017 compared to 2016, owing to increasing demand for residential accommodation. As per industry experts, the demand for new houses is estimated to be around 350,000 per year until 2020. Such positive factors are expected to drive the consumption of flame retardant chemicals in the construction industry through the forecast period. 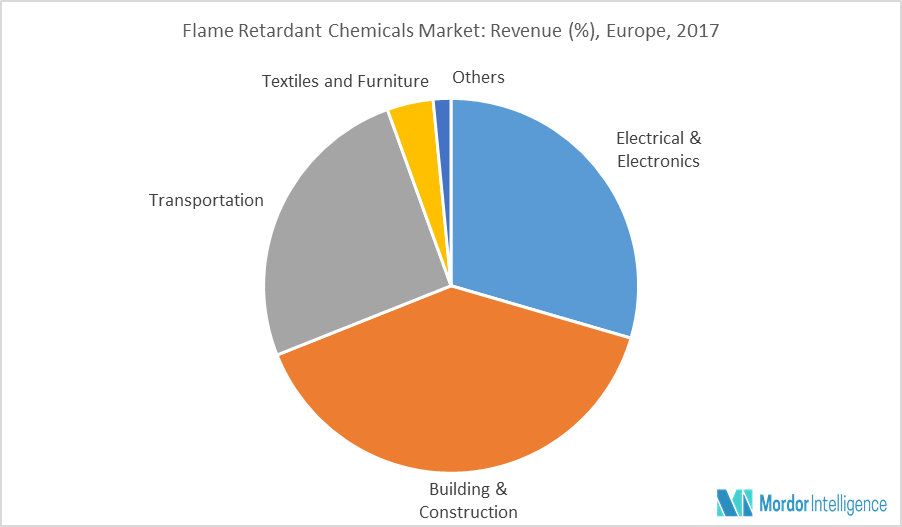 In 2017, Germany held the highest market share, accounting for more than 30% of the market. Germany is one of the major countries in Europe, with ample construction activities being supported by the growing economy. The construction sector in Germany recorded a huge growth in the year 2016. The permits for new residential buildings issued in Germany increased by over 20% on the year in 2016 alone. The government issued permits for 380,000 residential buildings in 2016, which is a sharp increase from the 313.000 permit issued in the 2015. Apart from construction industry, Germany’s automotive industry is one of the major consumers of flame retardant chemicals. The automotive industry in Germany is the single largest industry, which accounted for around 20% of the total German Industrial Revenue in 2016. Germany leads the Europe’s automotive market with 41 assembly and engine production plants that contribute to one third of the total automobile production in Europe. Overall, the growing demand from end-user industries is expected to promote the growth of flame retardant chemicals market.