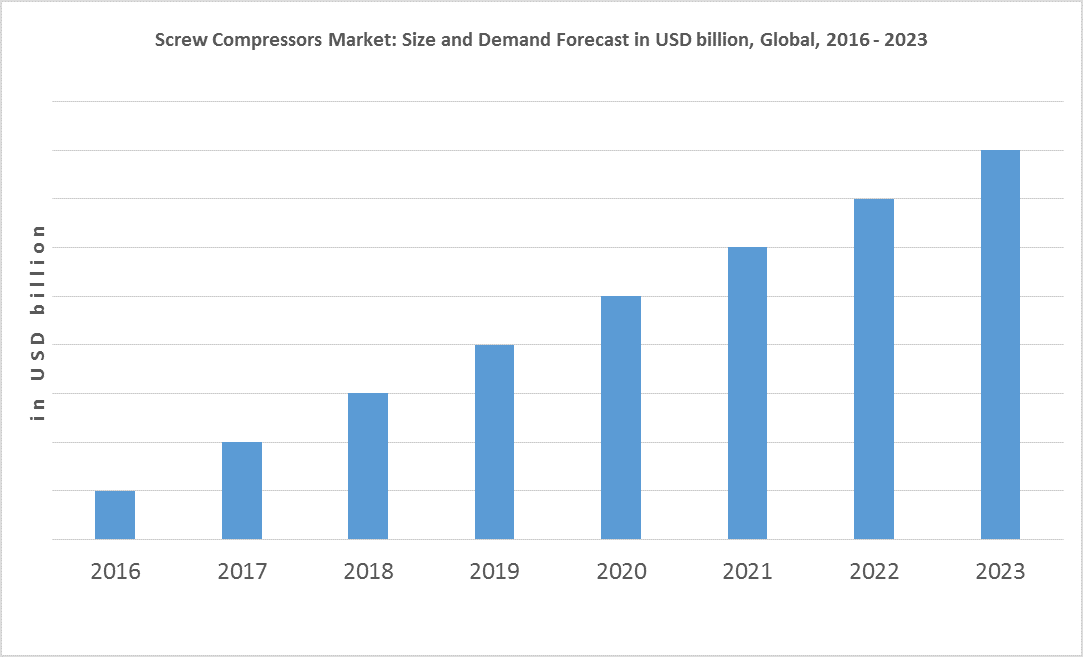 Increasing Use of Natural Gas - Driving the Market

Natural gas production had witnessed significant developments over the past few years, worldwide. The combination of hydraulic fracturing and horizontal drilling technology has allowed access to enormous quantities of natural gas, from shale formations in countries, such as the United States and China. Although these countries have an extensive natural gas infrastructure, that efficiently produces, stores, and transports natural gas from producing fields to end users; the continued production of natural gas from shale formations is expected to create the need for new pipeline infrastructure, and the expansion of existing infrastructure. As screw compressors are an essential equipment used in natural gas processing, such increase in natural gas infrastructure is expected to drive the growth of screw compressors during the forecast period.

Moreover, the global natural gas consumption is likely to reach 485 Bcf/d by 2040, growing from 340 Bcf/d in 2015, particularly in regions, like Asia and the Middle East. According to EIA, China’s natural gas consumption is expected to surpass all other countries, except the United States. Therefore, these countries are expected to create a huge demand for screw compressors during the forecast period.

The North American landscape is full of opportunities for suppliers of screw compressors. The end-user industries, such as oil & gas, power generation, chemical, and petrochemical have had significant investments. Screw compressors are essential equipment for critical processes across these industries. The major factors driving the North American screw compressors market are the demand for clean power, the immediate need to address the increase in emissions and the huge investments in the natural gas-operated power plants.

India leads in the growth in gas consumption in entire Asia-Pacific. Gas accounts for only 5% of primary energy demand in India, leaving plenty of room for expansion. Strong economic growth has led to higher utilization of gas-based power capacities and increased use in end-user industries. Moreover, India has 25,329 MW of gas-based power plants, of which 14,305 MW are stranded (fully or partly inoperative). In 2016—17, these plants operated at just 22.51 percent plant load factor (PLF), producing 49 billion units of electricity. India is planning on reviving this underutilized area, which is likely to create opportunities for companies engaged in screw compressors. The country has also been positioning itself to become the refining hub of the world. For example, India will commission world’s largest refinery by 2022, at a cost of USD 40 billion. Hence, India’s petrochemical industry will also offer some huge opportunities for the market players.

Reasons to Purchase The Report