The global agricultural pyrethroids market was valued at USD 1,842.41 million in 2015, and is expected to register a CAGR of 5.1% during the forecast period of 2018-2023. Pyrethroids are widely used to control insects in almost 120 different crops, including turf, lawns, and gardens. 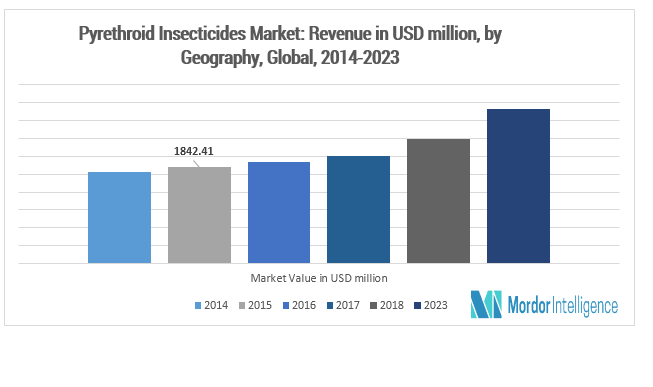 Advancements have made pyrethroid insecticides one of the major classes of pesticide chemicals. They also indicate that structural modifications can increase their potency ten-fold, reducing the seasonal pest control cost by a similar factor. Pyrethroids provide an excellent cost-benefit ratio in agricultural pest insect control, as they require fewer relative applications. Insecticides as active as some pyrethroids are known among chlorinated hydrocarbons, organophosphates, and methylcarbamates, but with the latter compounds, this remarkably high insecticidal activity is usually accompanied by unacceptable mammalian toxicity.

Pyrethroids do not provide new or unique approaches to insect control but are strict alternatives for the current compounds. However, to compete with the ever-increasing number of synthetic alternatives, the pyrethrum industry in various countries has become organized and efficient in production as well as distribution. Although a proven safety record is time-consuming, stable pyrethroids are being increasingly used to replace DDT and other chlorinated hydrocarbons.

North America is the Most Dominant Player

Pyrethroid insecticides dominate the insecticide market, with several products registered across North America, with the United States having the maximum number of products.  Canada, which is one of the largest agricultural producers and exporters in the world, also has a significant use of pyrethroid-based insecticides. The use of pyrethroid insecticides has been increasing as they are replacing organophosphates. Several vegetables such as potatoes, carrots, sweet corn, lettuce, onions, green onions, members of the cabbage family and fruits such as strawberries, other berries, and apples, etc., which are grown in the country, get treated with pyrethroids, registered in Canada.

3.2.2 High Toxicity to Environment and Humans

7. Future of the Market