By 2040, the global demand for energy is expected to increase by 28% from the level in 2015. Despite the increasing share of renewables in the primary energy mix, oil & gas is expected to cater to approximately half the increased demand. Despite concerns hovering around the oil prices, the uptake of more upstream, midstream, and downstream based projects is necessary to meet the increased demand, resulting in increased usage of mechanical equipment. Like any mechanical system, moving parts in pumps, compressors, generators, fans and blowers, cranes, shakers, thrusters, valves, among other equipment used in the oil & gas industry require proper lubrication to function optimally. As the oil & gas industry shifts its focus toward more complex offshore locations and unconventional resources recovery, the risks associated with system failures also increases, resulting in increased demand for specialized lubricants. Additionally, growing pipeline network for oil & gas, coupled with an increased number of refinery and petrochemical projects across the globe, is also expected to supplement the demand for oil & gas lubricants during the forecast period.

With fewer remaining easy-to-access oilfields and maturing production from existing basins, in both onshore and shallow-water, development of deep-water reserves has become increasingly vital. Moreover, advancements in technology have made deepwater drilling safer and economically viable. With the rebound of oil & gas prices to a sustainable level from witnessing a record low in January 2016, the uptake of offshore oil & gas projects is expected to witness a significant increase during the forecast period. Most of North American land-based and shallow water oil fields have reached maturity, and there is little scope for a new field discovery in these areas. However, prospects are bright for offshore deepwater oil field exploration and production. To meet the global demand for oil in future, opportunities lie in the deep offshore seabed, where oil & gas operators continue to discover new reserves in the North American region. In a bid to ensure energy security by boosting domestic oil & gas production, countries across the Asia-Pacific region are expected to increase offshore oil & gas development activities. Similar interests are also expected to increase across the Middle East, Africa, and South America, to capture the growing demand for oil & gas. Increasing investment to develop offshore oil & gas fields is expected to be the major factor driving the global offshore lubricant segment during the forecast period. 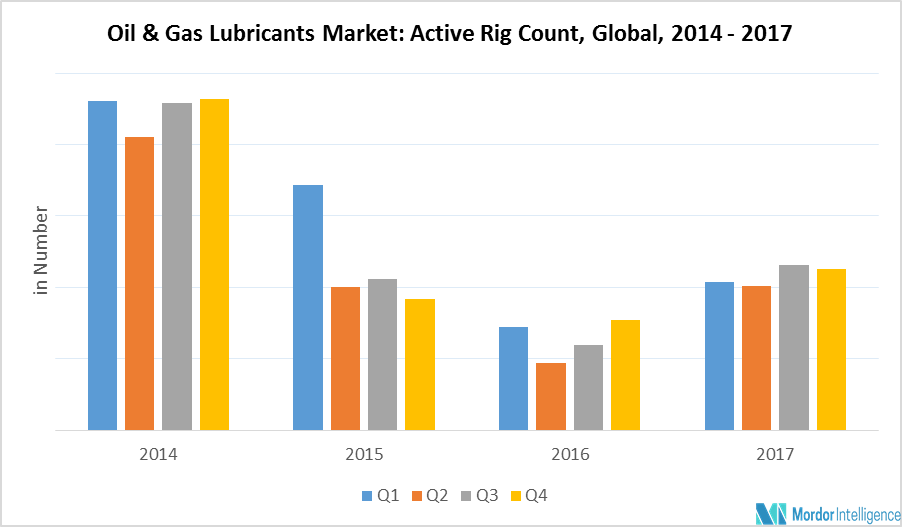 The exploration and production activities for unconventional resources, such as shale oil/gas, oil sands, and tight gas, are expected to remain high during the forecast period in the North American region. The GOM production in 2016 set an annual high of 1.6 million barrels per day (b/d), surpassing the previous record established in 2009, by 44,000 b/d. Market conditions are improving significantly amid rising oil prices, coupled with the support of a new and favorable administration with pro-energy policies that understand the strategic importance of a healthy oil & gas industry, exploration and production activities are expected to further increase in the United States. Furthermore, Exxon Mobil has already pledged USD 20 billion investment to improve the chemical sector across the US Gulf Coast. All factors, combined, are expected to supplement the demand for oil & gas lubricants in the region.

For a long time, India has been dependent on other countries to satisfy its oil & gas needs. However, to ensure energy security, the Indian government plans to ramp up domestic oil & gas production. India is expecting a USD 40 billion investment in next five years for exploration and production activities. Additionally, LNG and downstream sectors, including petrochemical plants, are also expected to attract similar investments, which in turn, would supplement the demand for oil & gas lubricants during the forecast period.