In 2016, the Middle East produced 34.5% of the global production and the regional production recorded an annual growth of around 5.7%, from 2015. During 2014-2017, the average crude oil price was around USD 44 per barrel. The average rig count in the Middle East has indicated signs of recovery, with lesser decline in 2017 compared to that of 2016. The average rig count also increased quarter wise in 2017, excluding the last quarter. The oil * gas activity in 2018 and during the forecast period is expected to be positive, supported by crude oil prices of above USD 60 per barrel mark. As a result, over the forecast period, it is expected that the well intervention activities, such as hole cleaning, stimulation, fishing, etc., will increase. 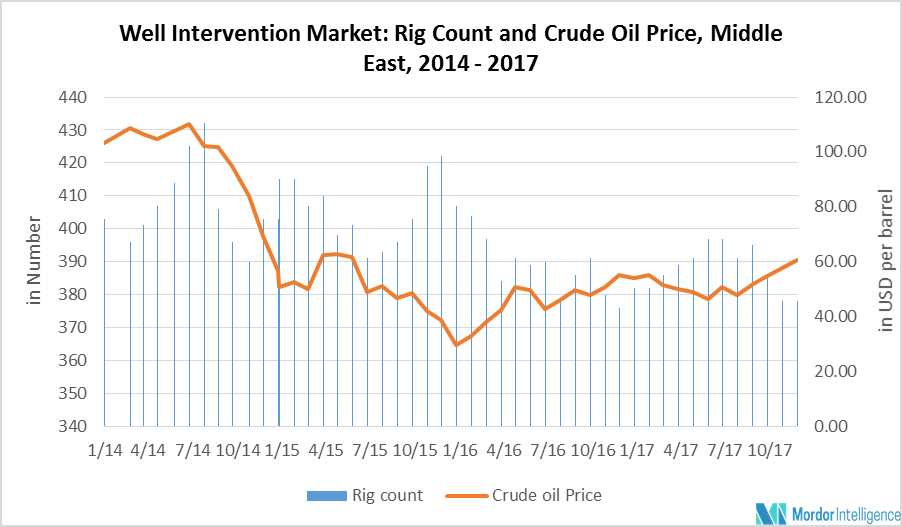 Crude oil production in Iran and Iraq registered CAGRs of 11% and 16% respectively, during 2014-2016. The rig count in Iraq has been on a rise since the second last quarter of 2016, in response to the stabilizing crude oil price. The annual average rig count in Iran increased from 43 in 2016 to 49 in 2017. A significant increase was observed seen in the second half of 2017. The number of wells completed in the region has also increased from 505 in 2014 to 566 in 2016, of which 34% were in Iran and Iraq, while Saudi Arabia had the largest share of 28%, as a single country. The number of completed wells is expected to further continue, as crude oil price shoots up and increase the demand for services, such as hole cleaning before completion, stimulation, etc., thus driving the market studied.

The crude oil price has indicated volatility in beginning of 2018, from over USD 72 barrel per day (bpd) to USD 62 bpd, in just two weeks. Saudi Arabia is one the major crude oil producers in the world, accounting for 13.4% of the global oil production. The country has maintained its focus on reducing the excess oil inventories. It is expected to reduce its production by 100,000 bpd in March 2018, in response to OPEC’s last meeting in November 2017. OPEC has extended its oil production cut until the end of 2018. The expected decline in production is likely to have an adverse impact on the well intervention market, over the short term.

BP, a British oil & gas company, has started the production from a USD 16 billion gas project in Oman, which involves the US-style of fracking technology. The project lies in the Khazzan field in the Central Oman, characterized by tight rock requiring horizontal drilling and hydraulic fracturing, to produce the trapped gas. In the first phase, 200 wells were drilled for production from Khazzan field and 100 wells are further expected to be drilled in 2018, after it receives the final investment decision from BP. The increasing hydraulic fracturing activity in Oman is expected to drive the demand for well stimulation, thus augmenting growth of the market studied.

**Subject to Availability on the Public Domain