The Middle East & Africa acrylonitrile-butadiene-styrene (ABS) resin market is projected to record a decent rate compared to the global market. The market is expected to register a CAGR of around 3% during 2018 to 2023 (the forecast period). Middle East & Africa accounted for around 3% of the global market share in 2017. ABS (Acrylonitrile-Butadiene-Styrene) is an opaque thermoplastic polymer, which is made from the monomers Acrylonitrile, 1,3-Butadiene, and Styrene. Due to properties, such as easy processing and exhibiting superior dimensional stability, excellent surface quality, and good resistance to chemicals and impact, ABS is widely used in different end-user industries. Furthermore, ABS is also known for its strength and durability.

Increasing Demand from the Automotive Industry

ABS is a high-performance thermoplastic, whose application in the automotive industry is rapidly increasing. ABS serves the automotive industry in a myriad of applications, some of which include manufacturing of high-quality automotive instrument panels, dashboard components, door liners and handles, seat backs, and seat belt components, among others. ABS is one such plastic, which is not only cheaper than metals but also helps in making automobiles more energy efficient, by reducing weight and by providing durability, corrosion resistance, toughness, design flexibility, resilience, and high performance at a low cost. Automotive production in the region is increasing rapidly, mainly in African countries. However, the sales have declined in the recent past, as most economies are oil-dependent. But with the recovering oil prices, the sales are expected to increase in the near future.

ABS has multiple advantageous properties, such as enhanced flame resistance, structural strength and flexibility of several different formulations to provide impact resistance and toughness, and resistance to many corrosive media, such as water, salts, food acids, inorganic acids, and alkali. Hence, it is the material of choice in most electrical insulation applications. Ongoing structural renovation in material formulations and the advent of efficient recyclable methods, spurred by the current and potential growth in technology, are expected to positively influence the supply and demand scenario of ABS plastics. Consumption of ABS is fueled by the burgeoning demand for consumer electronic devices, especially smart phones. Growing population and the rise in the regional GDP are the major drivers of the demand.

South Africa to Dominate the Market

The South African economy has been in crisis since 2016, with depreciation in its currency value and high unemployment rate that has caused the shrinkage of the economic growth. The government is planning to have a one-stop-shop program that will improve new businesses. The government also plans to take on new initiatives for promoting investments and building consumer confidence. The electronics market in South Africa slowed down, due to lack of government support and unfair import duties on many electro-mechanical components and switches. It is expected to have a bright future, with investments boosting and growing consumer demand. The country’s ABS market is expected to grow moderately during the forecast period. 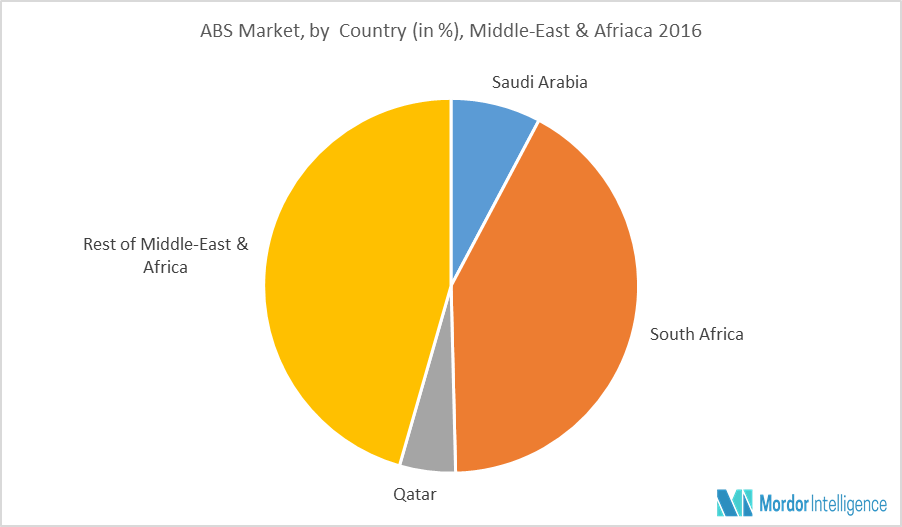 4.1.1 Growth in End Use Industries