Increasing Prevalence of Chronic Diseases to Boost the Market

Some of the most common chronic diseases include, heart disease, stroke, type 2 diabetes, obesity, cancer, and arthritis. According to Centers for Disease Control and Prevention (CDC), in United States seven of the top 10 causes of death in 2014 were chronic diseases. Cancer and heart diseases together accounted for an approximate of 46 percent of all deaths. It has also reported that about half of the adults in United States had one or more chronic conditions and one if four had more than two chronic conditions. Moreover, this numbers are expected to increase in the next 10 years. Since, the adoption rate of injectable drug delivery devices is high among the population suffering from diseases, like diabetes and heart related disorders, the increasing prevalence of chronic diseases is expected to contribute for the growth of injectable drug delivery technology market in the forecast period.

The convenience in handling syringes and the automation of dispensing the drug in exact proportions is also contributing to the growth of the market.

Injuries and Infections Caused by Needles

Injuries and infections due to needles are acting as a major restraint for the global injectable drug delivery technology market. According to World Health Organization (WHO), globally there were more than 2 million needlestick injuries per year. Another study estimated these numbers often reach more than 3.5 million annually. The European Biosafety Network estimated that in 2007, there were more than 1 million needlestick injuries annually in Europe alone. WHO has estimated that with these numbers are expected to increase by atleast 20% in the next 5 years. Moreover, there has been an increment in the infections caused by needles over the past few years. Therefore, with the increasing injuries and the infections caused by needles, there is reluctance among the population to use the injections, which is hampering the growth of injectable drug delivery technology market, globally.

Growing use of alternative drug delivery methods along with safety concerns associated with the use of injections is also restraining the market.

Geographically the injectable drug delivery technology market is been segmented into North America, Europe, Asia Pacific, Middle East & Africa, and South America. North America holds the major share of approximately more than 42 percent in 2017 and is expected to grow in the forecast period due to factors, such as rising incidence of cardiovascular diseases, growing geriatric population, and the strong presence of industry players in that region. Europe has holds the second largest position in the market followed by APAC region. 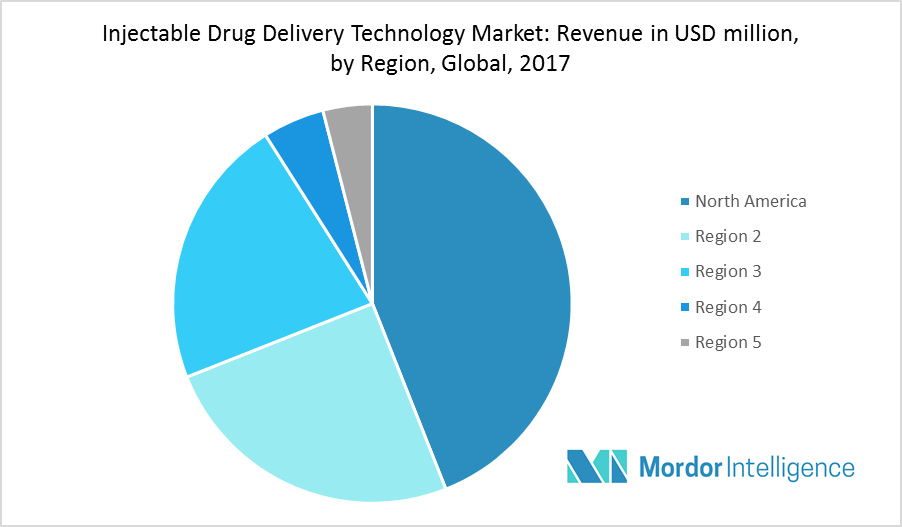