The Europe Riot Control Equipment market is expected to grow at a CAGR of more than 4.5% during the forecast period. Situation in Europe has become intense over the recent years owing to the rise of ISIS and the mass exodus from war and conflict ravaged countries like Syria, Libya etc. France was named as the deadliest country for journalists with 11 deaths in recent past.The latest Paris terrorist attacks have further worsened the internal security situation. Europe, especially Western Europe has had little internal security problems in the past, but the situation has changed rapidly. The flood of immigrants from war ravaged countries has further worsened the situation and sentiment, and the possibility for violent clashes, riots remains a possibility in the region.Moreover, recent riots in Russia have forced the  government to increase riot control equipment budget.

Emerging countries, which  are prone to riots, protests and demonstrations, have realized the importance of having effective riot control equipment to contain the situation.With rising possibility of social conflicts and tensions, the market for riot control Equipment in Europe is expected to see a good rate of growth in the coming years. Growth in the Riot Control Equipment Market in Europe is expected to be led by Countries like Russia, Germany, France and Poland. 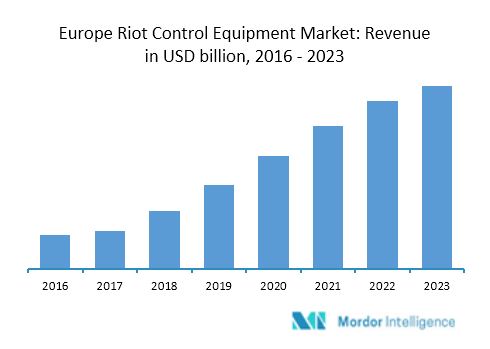 August 2017: Kalashnikov unveiled a retractable barrier known as 'Shield' or 'Schit' at in the International Military-Technical Forum, 2017, held at Moscow. Shield is basically used for the purpose of riot control.

Reasons to Purchase this Report:

Customization of the Report:

This report can be customized to meet your requirements. Please connect with our analyst, who will ensure you get a report that suits your needs