Fluoropolymers are specialty polymers that are experiencing a strong market growth. Most of the growth is because of a strong demand from the automotive & transportation, electrical & electronic, chemical processing, and industrial sectors. The automotive & transportation and electrical & electronics industries together account for a major share of the total demand for fluoropolymers. Automotive manufacturing is one of Europe's most enduring industrial activities, it incurs billions of euros in investment and further represents a large portion of the continent's exports. Moreover, automobile manufacturers operate around 302 vehicle assembly and production plants in 26 countries across Europe. Furthermore, Germany is the largest producer of electronics in the European region and the market is expected to expand during the forecast period due to the growing demand for more innovative and technologically advanced products in the industry. The country’s industrial electronics production accounts for around 50% of the total European output. The production in the electrical & electronics industry in the country was estimated to have increased by 4.7% in terms of the real industry output in 2017. Such positive growth in Europe is expected to drive the market through the forecast period.

PTFE (Polytetrafluoroethylene) to Dominate the Market

PTFE is a thermoplastic polymer, which is a white solid at room temperature with a density of about 2200 kg/m3. It has excellent thermal and electrical insulation properties, and has a low coefficient of friction. It is distinguished by its slippery surface, high melting point, and resistance to attack by almost all chemicals. These properties have made it familiar to consumers as the coating on non-stick cookware and it is also fabricated into industrial products, including bearings, pipe liners, and parts for valves as well as pumps. With the growing demand from various end-user industries, the market for PTFE (Polytetrafluoroethylene) is projected to grow during the forecast period.

In 2017, Germany held the highest market share. The automotive industry in Germany is the single largest industry, which accounted for around 20% of the total German Industrial Revenue in 2016. Germany leads the Europe’s automotive market with 41 assembly and engine production plants that account for one-third of the total automobile production in Europe. Overall, the growing demand from end-user industries in the country is expected to promote the growth of fluoropolymers market. 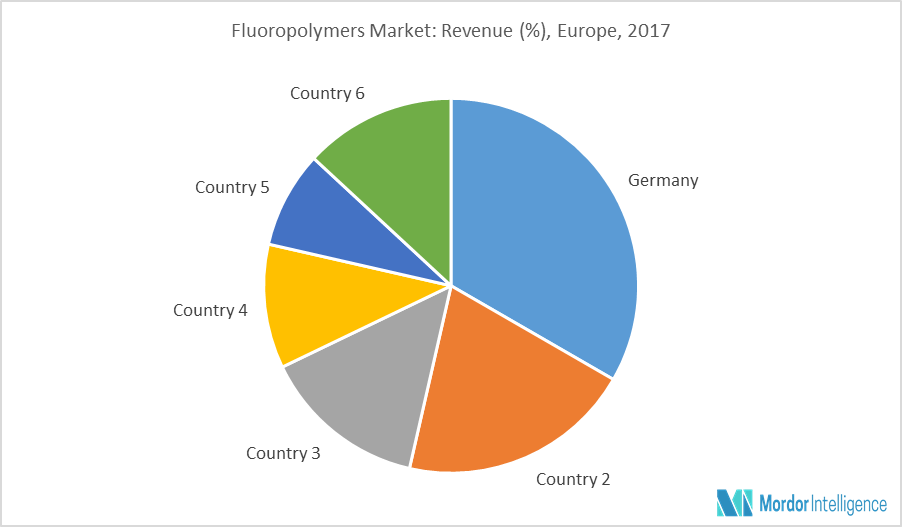