The scope of the report is limited to various types of emerging technologies in Brazil, such as Edtech and Fintech, among various others. The study also emphasizes on in what manner the growing focus on the start-up culture in the country is driving the market.

The startup & tech innovation sector has witnessed a sharp rise in Brazil amidst the recession in the past couple of years by generating considerable revenue, attracting a number of foreign investments, and creating thousands of jobs for the youth in the country. The ongoing political unrest over the past few years in Brazil has negatively affected the development of the tech sector in the region. The tech sector in Brazil has been contributing to almost 5% of the overall GDP of the country. According to Acelera MGTI, a local start-up accelerator program tech sector in the country contributed over USD 100 billion toward the country’s GDP. Moreover, there has been an increase in the number of acquisitions, as compared to the past. Technology sector’s innovation, corporate venture capital growth, and a mature ecosystem, are further helping the company’s economic engine to bounce back.

Increasing Focus on Start-up Culture to Drive the Market

Recent years have seen an increase in the activities related to the start-up scenario in the country. It is a pool of entrepreneurs with over 300,000 companies created each year. The market has witnessed investments and collaborations with foreign companies. For instance, Monsanto, a biotech company based in the United States, announced a partnership with Microsoft for investing in start-ups based on agricultural technology in Brazil. Similarly, the emergence of Fintech start-ups in Brazil has been driving more speed, transparency, mobile access/management, automation, and customer self-service to the financial services sector in the country.

Despite the recent political havoc and recession in the country, e-commerce has experienced a huge growth in the recent times. During 2015-16, online sales in the country grew above 10% in value and almost 3% in volume, as compared to previous years, as per the reports of the Brazilian e-Commerce association. During the same year, the cumulative sales of e-commerce was nearly 3% of the total sales in the country. Due to the changes in consumer behavior, e-commerce is expected to experience decent growth during the forecast period. Moreover, according to EBIT, there has been a change in the shopping frequency of customers in the region. Though the disposable incomes are increasing, the frequency of buying has reduced. Hence, adopting strategies accordingly with the consumer preferences may fetch fruitful results to the e-commerce startups of the country. 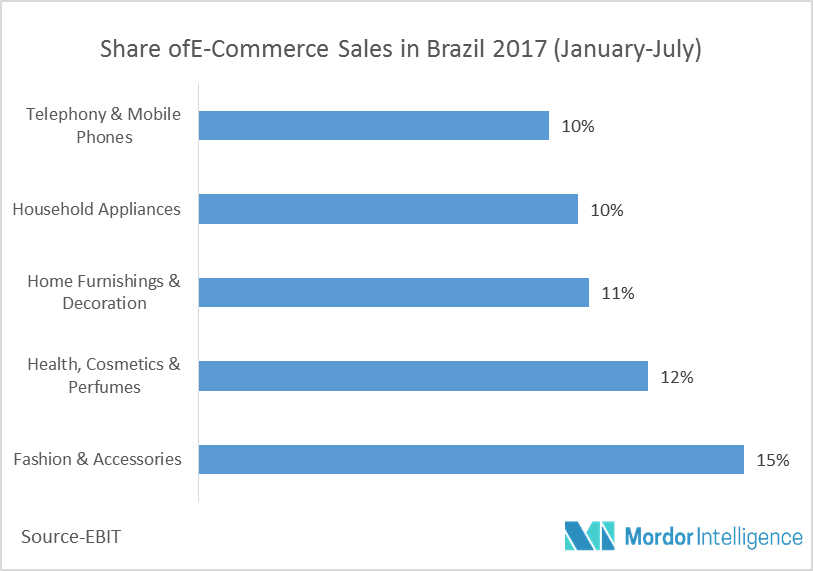 1.1 Key Deliverables of the Study

1.4 Key Findings of the Study

4.5.4 Threat of Substitute Products or Services

6. Future of the Emerging Technologies in Brazil