Starting in 2012, the GCC countries invested hundreds of billions of dollars combined to expand their seaports to keep up with increasing demand and booming businesses in the region. There has been a shift in the direction and nature of trade in the region with the emerging markets which has helped the regional ports to grow. Since then, more than 35 ports in the GCC have been adding space for as many as 60 million standard containers and will continue to do so over next five years, more than doubling capacity per port from 50 million cargo boxes in 2012 to about 100 million boxes in 2022. In this region, the UAE is located ideally as a trade platform between Asia and the Far East as well as the West, Central Europe, and Africa, making it a highly favorable geographic location which provides great opportunity to establish one of the world’s most important shipping and logistics centers in the world.

Investment in ports in all countries of the region has been increasing dramatically. Each of the GCC countries have made the development of port and logistical infrastructure a major factor of their individual economic diversification plans. GCC governments are continuing to invest huge amounts of capital into many port projects in order to take advantage of their prime geographic location which lies along major world trade routes to be control supply of crude oils to several regions of the world and use it to leverage other sectors of their respective economies. Kuwait is leading the way in this strategy with the highest amount of investment in sea ports infrastructure, since it relies heavily on revenues from oil production. Kuwait has been the foremost country of the GCC in terms of highly ambitious port development projects in an effort to increase its logistics capacity. The Mubarak Al-Kabeer port on Bubiyan Island which is valued at USD 16 Billion of investment, is expected to be the primary driver of growth in the nation's wider transport services sector in 2018.

In early 2017, Qatar inaugurated the first phase of the Port of Hamad valued at USD 7.4 billion which is expected to be completed in 2020. It will be the largest port in the Persian Gulf and enable the country to compete in the regional trans-shipment market which is currently dominated by the Port of Jebel Ali in Dubai. The port has been crucial in allowing the country to reduce the negative economic impacts associated with the June 2017 blockade due to which several GCC neighbours cut diplomatic ties and trade with Qatar. Within the United Arab Emirates, the Khalifa Port in Abu Dhabi is emerging as an increasingly suitable trans-shipment center and playing a major role in diversifying the UAE's economic foundation from oil under the Abu Dhabi Economic Vision 2030. The government of UAE is also sponsoring an expansion of the port's capacity, which is expected to have the capacity to handle 15mn cargo containers a year by 2030, and has also entered an agreement with China-based COSCO for a 30 year operation grant. The Khalifa Industrial Zone will be close to the port which is expected to be completed by 2030 and is expected to contribute up to 15 per cent of Abu Dhabi's non-oil GDP. 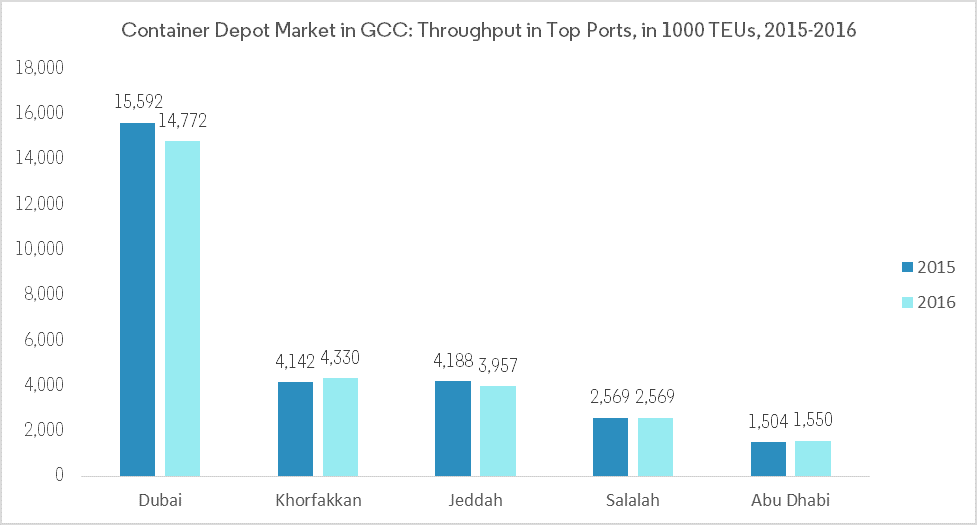 Another key trend is the role of technology and integrated solutions in the ports of GCC countries. This is allowing greater transparency in the transit of goods, and increasing overall efficiency in the supply chain. Integrated solutions which are focusing not only on sea freight but on the entire supply chain in the region is a driving factor which has been relying on customer needs and door-to-door process. Gulftainer has put in place a technology transformation strategy under which the implementation of its new Marine and Container Handling (MACH) terminal operating software, as well as the SAP S/4HANA business suite have enhanced customer service function and have accelerated operational efficiencies.

Container Depot Market in GCC Report Customization and Benefits: This report can be customized to meet the desired requirements. Please connect with our analyst, who will ensure that you get a report that suits your needs.

5.1 Key Insights on Containerized Trade in Western Europe - By Country, By Port, and By Cargo Type