Non-OECD Asia (which includes India and China) is expected to account for more than 60% of the world's total increase in energy consumption from 2015 through 2040. Despite the increasing share of renewables in the primary energy mix of the Asia-Pacific region, oil & gas is expected to remain the primary fuel, catering to the growing energy needs. However, the region is home to one of the largest oil consuming nations, which is largely dependent on other nations to satisfy its energy needs. In a bid to ensure energy security, despite concerns hovering around oil prices, the uptake of more upstream, midstream, and downstream based projects is necessary to meet the increased demand, resulting in increased usage of mechanical equipment. Like any mechanical system, moving parts in pumps, compressors, generators, fans and blowers, cranes, shakers, thrusters, valves, among other equipment used in the oil & gas industry require proper lubrication to function optimally. As the oil & gas industry in the Asia-Pacific region shifts its focus toward more complex offshore locations and unconventional resources recover, the risk associated with system failures also increases, resulting in increased demand for specialized lubricants. Furthermore, expansion of oil & gas pipeline network, coupled with an increased number of refinery and petrochemical projects across the Asia-Pacific region, is also expected to supplement the demand for oil & gas lubricants in the Asia-Pacific region, during the forecast period.

Asian economies, including China, India, South Korea, and Southeast Asian countries, are expecting to witness a rapid increase in oil demand in the next few years. However, the Asia-Pacific region is home to few of the largest oil consuming nations. India’s oil import bill in the first 11 months of the fiscal year 2017 saw a 25% jump to USD 80 billion compared to the same period in the previous year. Similar trends are also observed in other countries. In a bid to cut down on oil import bills and to ensure energy security in the region, countries across the region are expected to increase domestic oil & gas production, particularly from offshore field development. There has been an increased number of midstream and downstream projects, including LNG terminals, pipeline network expansion, and downstream capacity expansion in the region. As the number of projects increase, the number of equipment used also increases, and the demand for specialized lubricants is expected correspondingly increase, during the forecast period. 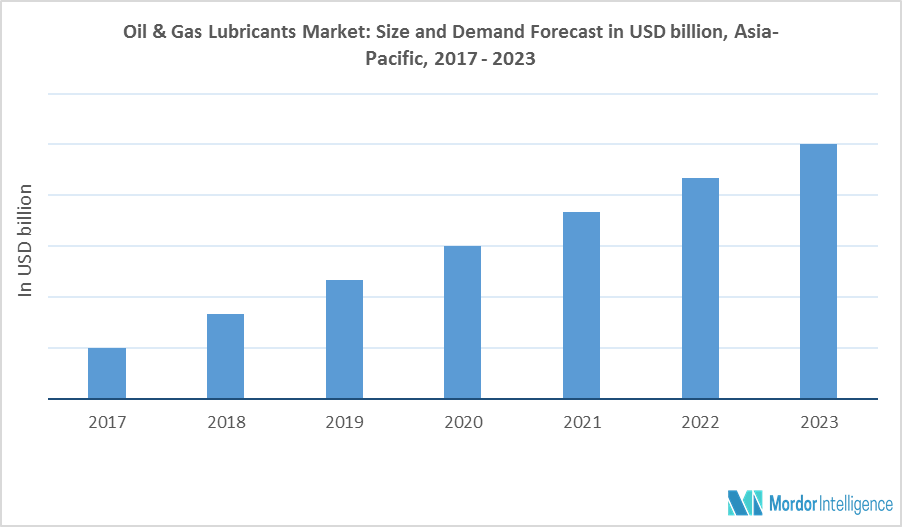 India has been dependent on other countries to satisfy its oil & gas needs, for a long time. However, to ensure energy security, the Indian government plans to ramp up domestic oil & gas production. India is expecting a USD 40 billion investment in next five years for exploration & production activities. After more than a decade of nearly static production, state-run Oil and Natural Gas Corporation (ONGC) is expected to invest approximately around USD 11 billion over the next three to years, to ramp up gas production by nearly 30%. In the fiscal year 2016, ONGC drilled approximately 501 wells compared to 386 wells in 2015-16. There are series of complex upstream projects in India that are lined up for commissioning during the forecast period, which are expected to significantly increase the demand for oil & gas lubricants in the Asia-Pacific region. Furthermore, LNG and downstream sectors, including petrochemical plants, are also expected to attract similar investments, which in turn, would supplement the demand for oil & gas lubricants during the forecast period.