Asia-Pacific is one of the leading regions for growth in offshore oil & gas development. Asia-Pacific has been second only to North America since 2013 in terms of new helicopter deliveries, with 26.4% of new deliveries taken up only by Asia-Pacific helicopter services operators in 2015. The offshore helicopters delivery share to the region in 2016 crossed 31.8% (YTD), ahead of both North American and European regions, each with around 27% share. The growth is mainly attributed to rising demands of fixed-wing and rotary-wing helicopters from the regional oil & gas operators for drilling and maintenance activities for offshore oil & gas installations. 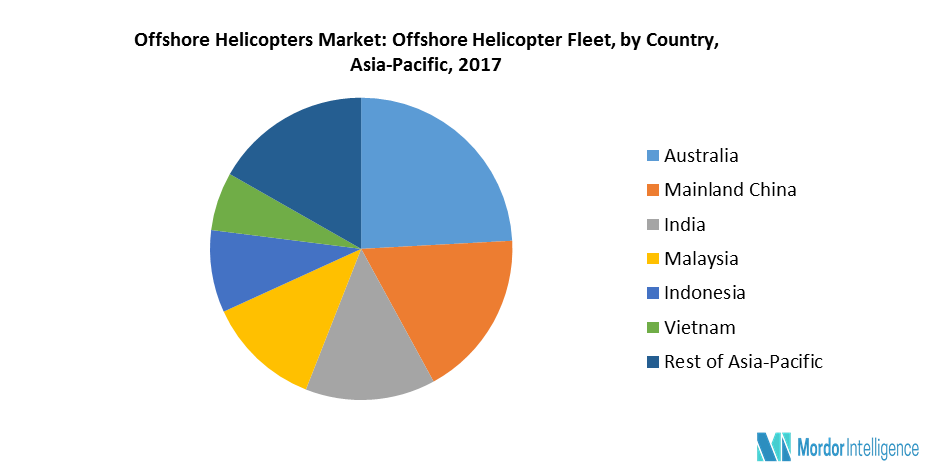 Along with a quest to reduce oil import bill and to become self-sustained by promoting domestic oil production, the countries in the Asia-Pacific region have a rising demand for offshore helicopter fleet used for regional search and rescue (SAR) and emergency medical services (EMS). Moreover, the depleting fleet of old aircrafts in the region and the rising airspace safety regulations offers a promising market for the OEMs to provide their modern fleet of aircrafts.

In 2016, the offshore helicopter fleet count declined by 25%. However, with the recovery in crude oil price, the fleet count increased by 2.9% in the region, with China being the fastest developing market in the region, registering 14.7% y-o-y fleet growth in 2017. Other countries, such as Australia, India, Malaysia, and Indonesia have also witnessed significant increase in the fleet count. Moreover, with the recovery of oil prices to sustainable levels coupled with increased spending for offshore project development and maintenance activities, especially in the deep-water exploration and production (E&P) operations, the offshore helicopter services are expected to grow substantially during the forecast period.

From the demand-side perspective, the demand for oil is expected to double by 2050, primarily driven by developing economies in the Asia-Pacific regions. Hence, the above developments in the offshore oil & gas industry are expected to have a positive impact on the offshore helicopter services market.