The Asia Pacific Hemodynamic Monitoring Market accounted for USD 194.66 million in 2017 and is expected to reach USD 266.26 million by 2023 while witnessing a CAGR of 5.36% over the period of 2018-2023 (henceforth referred to as the forecast period). Hemodynamic monitoring devices are used to measure the blood pressure inside the veins, heart, and arteries. These devices are also used to monitor the blood flow and the concentration of oxygen in the blood. The key factors propelling the market studied are the increase in the number of critically ill geriatric population and rising prevalence of cardiac disorders and diabetes. 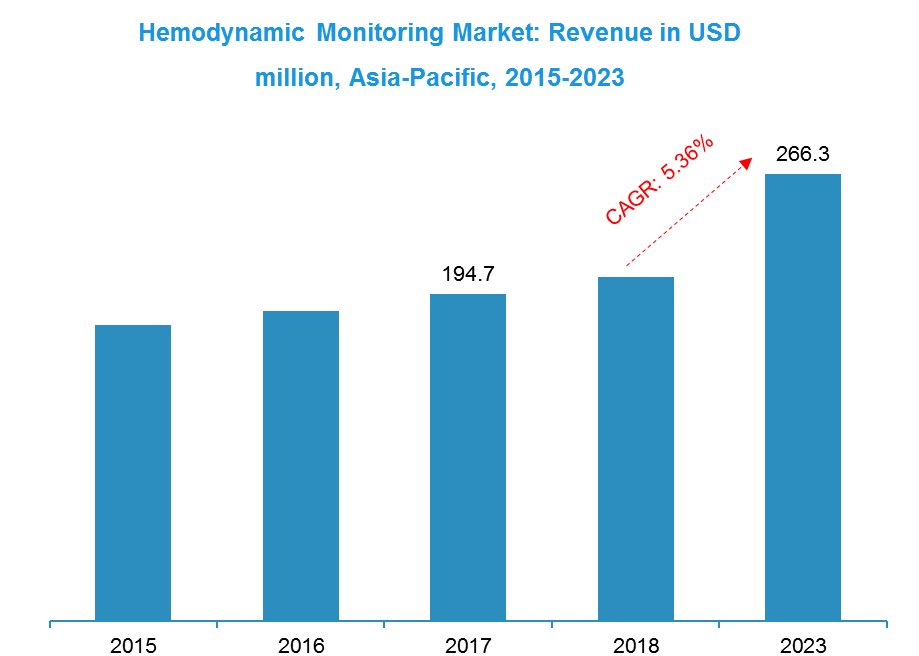 A rise in the Prevalence of Cardiac Disorders and Diabetes

There has been an increase in the number of reported cases of lifestyle diseases, like diabetes, obesity, COPD, and cardiac myopathy, among many others, which require medical monitoring by healthcare professionals in the Asia-Pacific region. Diabetes is one of the major death-causing diseases in the world. Asia-Pacific is the fastest growing region, due to the presence of a huge diabetic population. China and India contribute to major shares in the Asia-Pacific hemodynamic monitoring market, due to the presence of heavy diabetic population. According to WHO, over 60% of the diabetic people in the world are living in Asia-Pacific, where India and China are the major contributing countries, with a diabetic population of 90 million and 62 million, respectively. By 2030, both the countries, together, are expected to witness a diabetic population of approximately half a billion individuals. Cardiovascular diseases (CVD) in the Asia-Pacific region account for more than half of affected worldwide. The factors that lead to cardiovascular diseases are obesity, diabetes, lifestyle, and dietary habits. Australia and New Zealand are reported to have high rates of mortality, due to CVD diseases. The Heart Foundation stated that CVD is a major cause of death in Australia, with 45,053 deaths attributed to CVD in the country in 2014. Cardiovascular disease kills one Australian every 12 minutes. Therefore, the rise in the prevalence of cardiac disorders and diabetes is directly proportional to the hemodynamic monitoring market.

Some of the complications like bruising/bleeding at the site, haemorrhage, vascular erosion, infection, pneumothorax, and puncture or rupture of the pulmonary artery, among others, are associated with invasive monitoring systems. For instance, a pulmonary artery catheter is used for the measurement of hemodynamic variables, which cannot be done continuously by less invasive means. There are a number of complications associated with these systems. It can be either related to central venous access, insertion, and manipulation or due to the presence of the premature atrial contraction (PAC) in the cardiovascular system and errors resulting from incorrect interpretation. Furthermore, one of the most dangerous risks of this procedure is the pulmonary artery rupture, which has over 50% mortality rate. However, this is rare in patients over 60 years old who have pulmonary hypertension. Pediatric patients are more vulnerable to these complications. Therefore, extreme care is required while flushing lines, to avoid backward blood flow and fluid overload. Invasive hemodynamic monitoring is quite expensive and time-consuming, which may act as restraining factors for the global hemodynamic monitoring market. Other major complications associated with an invasive monitoring system are cardiac complications, perforation of heart or cava, rupture of the pulmonary artery, and hemoptysis. Hence, rising incidences of complications associated with invasive monitoring systems are major restraining factors for the growth of the market.

Insights on Type of System Segment

Under the Type of System segment, the largest market share in the current market is held by Invasive Monitoring Systems. However, this sub-segment is expected to register negative growth over the forecast period, and a subsequent decline of market share. On the other hand, the fastest growing sub-segment is expected to be the Non-Invasive Monitoring Systems. The largest market share of Invasive Monitoring Systems is expected due to invasive techniques’ ability to provide critical care and allow detailed determinations of cardiorespiratory variables. These techniques are also used for the effective preoperative assessment of high-risk patients. On the basis of the invasive hemodynamic monitoring, a preoperative system has been developed. Due to this, moderate or severe impairment patients have been observed to show higher survival rates than patients without moderate or severe impairment. However, the highest growth rate over the forecast period will be registered by Non-Invasive Monitoring Systems due to multiple benefits that such systems are capable of providing to, hospitals, such as cost reduction, minimizing the risk of infections, continuous and online data on various blood parameters, thereby, improving the patient care.

Under the Product segment, the largest market share is controlled by Catheters. On the other hand, Cardiac Output Monitors are expected to be the fastest growing product category over the forecast period. The fast growth rate for Cardiac Output Monitors has been estimated primarily due to the growing up-trend in the adoption of non-invasive and minimally invasive technologies. 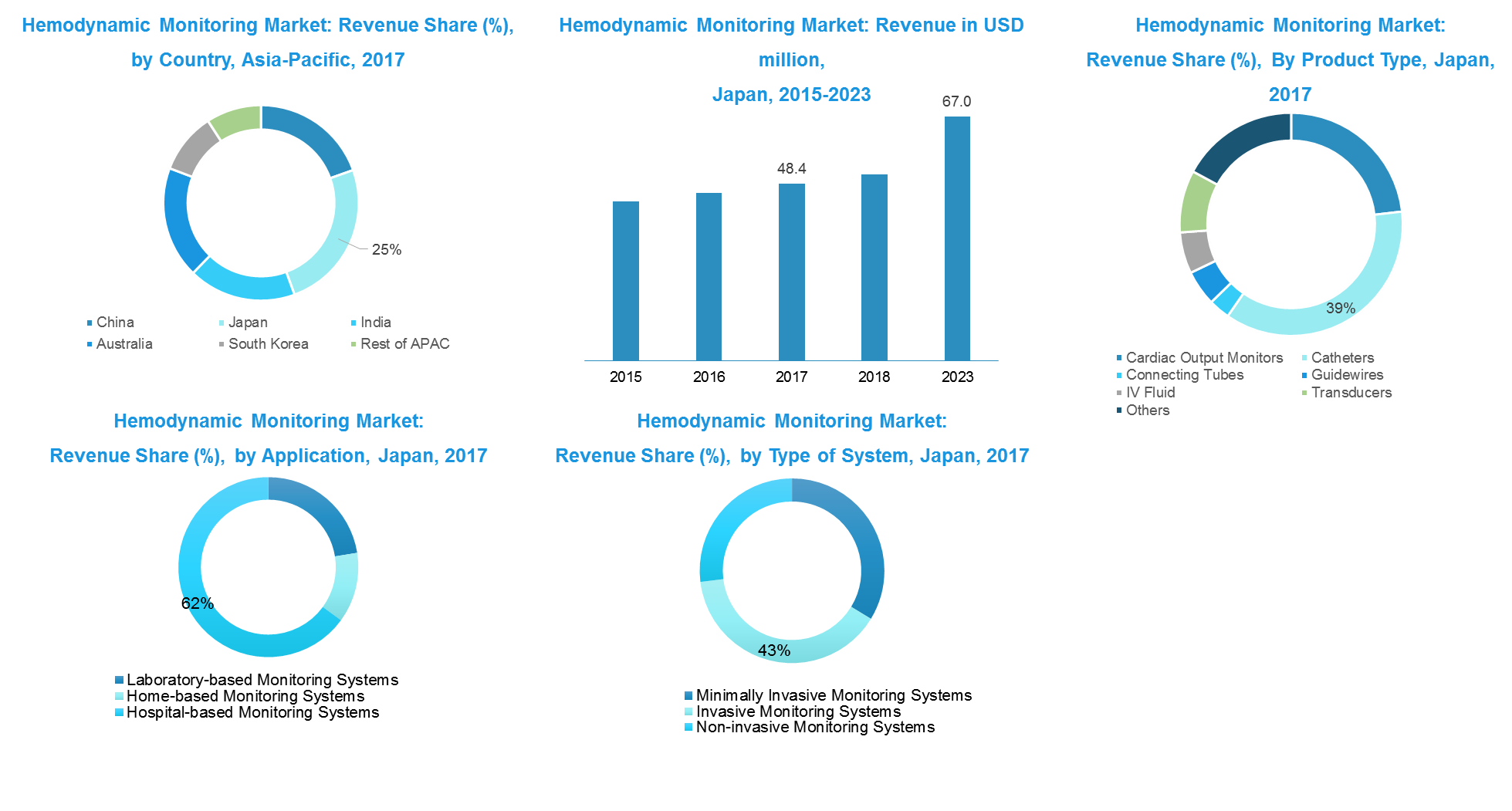 4.2.4 Threat of Substitute Products and Services

5.1.1 Increase in the Number of Critically Ill Geriatric Population

5.1.2 Rise in the Prevalence of Cardiac Disorders and Diabetes

8. FUTURE OF THE MARKET