Algeria has high sun radiation level and is one of the largest markets for solar power in Africa. The country occupies 75% of the Sahara desert territory. The northern part of the country has high insolation rates of 2650 KWh per m2. In 2016, the country’s total solar installed capacity was more than 240 MW. Under the National Development Plan for Renewable Energies, the country aims to install renewable generation capacity of 22 GW by 2030, with solar accounting for almost 60% of the capacity. As a result, the demand for solar energy is expected to grow in the country during the forecast period.

In Algeria, oil & gas companies are also entering in the solar power market. Italy’s Eni and Algeria’s Sonatrach started their first solar PV plant of 10 MW capacity in May 2017. The companies are planning to expand their joint activities in the solar energy sector further, especially in the production sites of Sonatrach in the country. The company has also signed a comprehensive agreement with Total, a giant oil & gas company. The agreement includes areas, such as exploration, solar, and others. Oil & gas companies turning to the solar energy market in Algeria shows the potential of the country to exploit solar energy.

Delay in Projects Restraining the Market

In March 2017, the Algerian Government announced the plan for a 4 GW tender for a large-scale solar PV plant project by the end of the month, but it did not happen. In April 2017, the government published the decree implementing the project, but the request for proposal (RFP) for it was not published for a long time. Further, the country has placed a rule to construct PV components in the country itself. Solar power market is at its initial phase in the country and does not have the required facility for developing PV components in required time. As a result, delay in projects is expected and is, hence, restraining the market.

In the past two to three years, Algeria has witnessed a high rate in terms of solar installed capacity. Installed capacity has grown from 26 MW in 2014 to more than 240 MW in 2016. Between PV and CSP, solar PV has a larger market share in the country. Several financial and energy firms have shown interest in funding the projects. Sonatrach is expected to fund around 50% of several solar power plants. Funding support is expected to help Algeria reach its target of 13 GW of solar power installation capacity. As a result, the market is expected to maintain the  growth rate in the coming future, supported by funding from financial and energy firms. 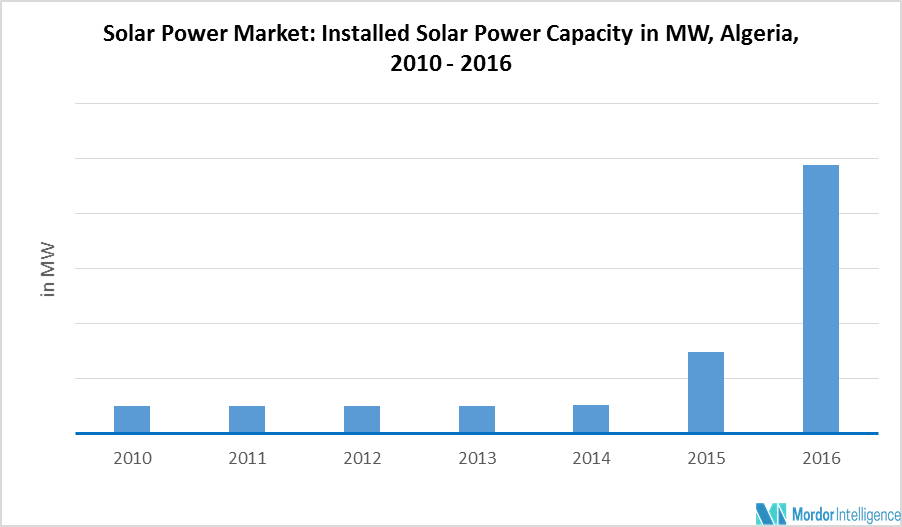 Reasons to Purchase The Report

3.3 Installed Capacity and Forecast till 2023

8.3 Strategies Adopted by the Leading Players